No Kidding: ‘Joker’ Is a Madman’s Indictment of Life 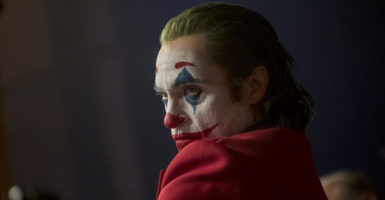 “Joker,” starring Joaquin Phoenix as Batman's future nemesis, represents the world as someone who commits a mass shooting might see it. (Photo: Niko Tavernise/Warner Bros. Pictures)

Even before its release, a tempest of arguments surrounded “Joker.” Would the movie cause violence by glorifying the story of how an everyman became a killer and Batman’s greatest nemesis?

On one side, some psychologists argue that the movie’s character study will educate society about mental illness.

Writing for Psychology Today, neuroscientist Bobby Azarian says the comic book character Arthur Fleck turns into a killer and villain called the Joker only “after he is bullied, beaten, and humiliated by others.”

Writing for Deseret News, professor of pop culture Kendall Phillips disagrees: “Once you start getting into the head of, you know, the sociopath, the anti-social person, the revolutionary, that’s when we suddenly think that this image of violence can be inspiring to the wrong kind of people.”

Both these views agree on a central point: “Joker” represents the world as someone who commits a mass shooting might see it.

The storyline differs from previous films in the Batman canon because it paints the universe—at least the DC Comics universe—with the leprous white of the clown’s makeup.

The R-rated movie’s first principle is that nothing good can ever happen to Arthur Fleck, brilliantly played by Joaquin Phoenix. As Fleck attempts to brighten people’s lives as a clown, everyone responds with wooden-cutout rejection.

If he teases a kid, the mom angrily tells him to leave. If he performs on the street, every passerby makes snide remarks to him in a rough New York accent. “’Ey, Clown, you ain’t even that funny! Haw, haw, haw! How’s that?”

Fleck gets mugged and his boss won’t believe him or notice the Jackson Pollock painting of bruises covering his body. TV comedians make fun of him.

If there had been a scene with a pet shop, all the puppies would bite his fingers with all the cruelty in their pint-sized hearts. The list goes on.

No one in Gotham City, from affluent swells to street thugs, has anything better to do than beat up Fleck.

It’s the same monomaniacal lie all lunatics tell themselves, that the whole world lives only to spite them and never does anything else.

Director Todd Phillips presents this vision of the world in its entirety without an iota of criticism.

In Fleck’s deterministic march into murder, we see how little Phillips believes in individual agency and choice. Fleck’s not responsible, it’s all the world’s fault. He doesn’t even ask for his own gun; he’s given one by a friend who wants him to be safe from muggers.

The scene nods stupidly to gun control, too, with Fleck attempting to reject the gun because he is mentally ill and it’s against the law.

“If only the Joker hadn’t been given a gun,” pundits will sigh. “His ravening malice against the entire world would never have been let loose without the friend-with-a-suspicious-brown-paper-bag loophole.”

In the whole “Joker” movie, poised to break box office records with $93.5 million its opening weekend, Fleck receives just one choice: Will he destroy the world by killing himself or by killing others?

Along with every murderer since Cain, he spits out the traditional refrain of wickedness: “With the way the world is, I have to do this! You’re getting what you deserve!”

To crown the nihilist’s fantasy that Fleck lives, he gets famous. As Fleck becomes more violent, a political movement forms around him with clown masks and “Kill the Rich” signs.

The rich, represented by Thomas Wayne (whose son Bruce will become Batman) and various other suit-wearing sadists, give the audience very little reason to disagree.

Director Christopher Nolan’s celebrated Batman movie trilogy from 2005 to 2012 provided a counterpoint to the despair and corruption of Gotham in its portrayal of a troubled man, Bruce Wayne, who suffered to save his city.

“Joker” succeeds only in expressing a common sentiment of our times—a universal indictment of society without nuance, charity, or counterpoint: “No one listens!” “Everything is corrupt and should be destroyed!”

Often this opinion expresses itself in American politics today. But in the end, it’s not a political feeling. It’s the Joker.

And if movie directors uncritically tell his story, they’re just teaching other life-hating clowns how to get noticed.