Nikki Haley: A Profile in Courage 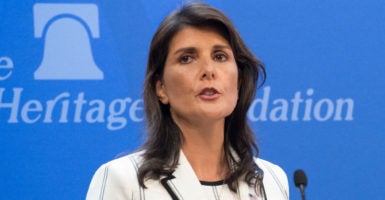 Yesterday, I had the honor of welcoming Ambassador Nikki Haley to The Heritage Foundation. And as she spoke before a packed audience, I realized we were witnessing a true profile in courage.

Ambassador Haley’s principles and tenacity have served her well all her life, first as a young businesswoman, then as South Carolina’s first Indian-American legislator, and later as the Palmetto State’s first female and minority governor.

And today, they serve America well in her role as our ambassador to the United Nations.

To do that tough job right—to stand firm for freedom-loving people in the face of despotic regimes—requires extraordinary courage.

Consider the abuse she has endured for pulling the U.S. out of the U.N. Human Rights Council.

The Human Rights Council is supposed to advance human rights around the world. But it has fallen under the influence of some of the world’s worst abusers of human rights.

It may be hard to believe, but the council’s membership includes such chronic abusers as China, Cuba, and Venezuela. Indeed, Freedom House rates nearly a third of the council’s 47 members as being “not free.” A third! And yet these nations sit at the council table, passing judgment on other nations—including the U.S.

It’s as though the U.N. has selected a pack of wolves to sit in judgment of other animals. And, not surprisingly I suppose, those wolves are condemning sheepdogs for animal cruelty.

For example, the council routinely condemns the U.S. for alleged human rights abuses. It has adopted a scathing report with 348 recommendations for how it thinks the U.S. should address problems ranging from police brutality to racial profiling to violations of “social and economic rights.”

And just this May, the council issued an equally absurd report accusing America of fostering “extreme poverty.” As the U.N.’s report put it, “For almost five decades the overall policy response has been neglectful at best.” But the author neglected to mention the $22 trillion the U.S. has spent during that period in our War on Poverty!

That U.N. report went on to make some baldly political points, as well, asserting that “the policies pursued over the past year seem deliberately designed to remove basic protections from the poorest [and] punish those who are not in employment … .”  In the U.N. Council’s view, it seems, that’s what the Trump tax cuts were all about.

As an American, I deeply resent such dishonest attacks on my country. And as a black American who spent my early years in a poor household, I know quite a bit more about poverty and human rights in America than “U.N. experts” who spend 20 days in the U.S. before writing their reports.

I know firsthand the overwhelming challenges faced by America’s rural and urban poor. I also know firsthand that America provides the greatest opportunity for its citizens to experience life, liberty, and the pursuit of happiness.

Ambassador Haley was as outraged about the “poverty report” as I was. Writing in National Review Online, she observed that, rather than waste its resources bad-mouthing the U.S.:

… the U.N. might have studied poverty in the Congo, where 60 percent of the entire population lacks the basics of food and electricity. Or Burundi, where the typical annual income is $280. Or Venezuela, where narco-state dictators have driven a once prosperous country into the ground with an inflation rate over 25,000 percent, and where diseases that were once thought eliminated are now reappearing.

Instead, she noted, the council opted to issue a baseless report that “reads like a socialist political manifesto of higher taxes, government-run health care, and ‘decriminaliz[ing] being poor’ (never mind that nowhere in America is it a crime to be poor).”

Meanwhile, the council has never condemned China, Cuba, Russia, Saudi Arabia, or Zimbabwe—despite their terrible human rights records. Instead, nearly half of the resolutions it has passed to condemn countries for human rights violations have focused on Israel.

For all these reasons—and thanks to Ambassador Haley’s leadership—America withdrew from the U.N.’s deeply flawed Human Rights Council last month.

In the wake of our departure, I hope the council reassesses what it is supposed to stand for and do. For example, it could condemn China for its ongoing religious persecution. Or Cuba for its brutal repression of political dissent. Or Saudi Arabia for its denial of women’s rights.

But that’s not likely as long as these and other repressive regimes sit on the council.

As Kenneth Roth, the executive director of Human Rights Watch, describes it, “Abusive governments try to join the council in the hope of protecting themselves and their kind from condemnation.”

That’s why Ambassador Haley was right to call out the council for its hypocrisy and to deprive it of the legitimacy it gains by having the U.S. as a member.

America doesn’t need the council. Because with courageous leaders like Nikki Haley, we are doing far more to promote human rights without it.