‘Thousands’ of Journalists Will Be Imprisoned If Trump Not Jailed, Economist Krugman Predicts 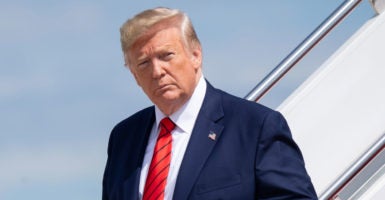 “Trump and a number of others end up in jail, or thousands of journalists end up in prison camps,” economist Paul Krugman says. Pictured: Trump disembarks after arriving on Air Force One at Joint Base Andrews in Maryland Sept. 26, 2019. (Photo: Saul Loeb/AFP/Getty Images)

Economist and New York Times op-ed columnist Paul Krugman suggested Friday evening that either “thousands of journalists” will be imprisoned because of the administration or President Donald Trump will end up in jail.

A formal impeachment inquiry was launched Tuesday after news that Trump had asked Ukrainian officials to look into Vice President Joe Biden’s son Hunter Biden regarding business dealings in the country. The transcript of this phone call was held in a special computer system for sensitive calls, according to the Times.

The White House restricted access to other phone calls between Trump and foreign leaders, CNN reported Friday evening. Following this news, Krugman tweeted that there seemed to be “two possible outcomes.”

“Trump and a number of others end up in jail, or thousands of journalists end up in prison camps,” Krugman, a Nobel Prize winner, suggested.

Starting to look like two possible outcomes: Trump and a number of others end up in jail, or thousands of journalists end up in prison camps https://t.co/I9DpBQFwtm

Krugman did not follow up his tweet with reasons as to how “thousands of journalists” would become imprisoned if Trump doesn’t spend time behind bars.

Turkey, China, and Egypt are responsible for more than half of all jailed journalists, a 2018 Forbes article reported. The report is based on data collected from the Committee to Protect Journalists, which noted that zero journalists were jailed in the U.S.

“We have learned of more Trump phone calls that the White House tried to keep secret,” she said. “CNN learning this hour the White House also tried to limit access to President Trump’s conversations with two controversial dictators.”

She added that this news could back up the whistleblower’s complaint, which was released to the public Thursday and alleged that presidential transcripts were placed more than once into a “codeword-level system.”

Krugman wrote an opinion piece Thursday titled “Impeaching Trump Is Good for the Economy.” He suggested impeachment “will slow down the administration’s war on competence,” adding that “the Nixon administration was a paragon of good government” compared to the Trump administration.