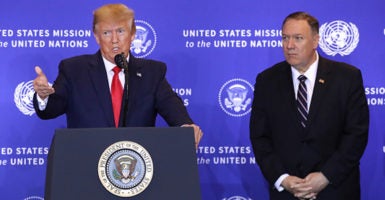 President Donald Trump used a press conference at the United Nations to strike back Wednesday at House Democrats who are moving forward on an impeachment inquiry.

“The witch hunt continues. But they’re getting hit hard on this witch hunt,” Trump told reporters.

The president spoke hours after the White House released an official transcript of his July 25 phone call with Ukrainian President Volodymyr Zelenskyy. During the conversation, the two leaders discussed Ukraine’s sudden dropping under Zelenskyy’s predecessor of an investigation involving the business dealings of the son of former Vice President Joe Biden.

At the press conference, Trump talked at length about numerous bilateral meetings he held with other world leaders at the United Nations, and said his visit to the U.N. General Assembly was productive but overshadowed by partisan attacks.

“With all of this tremendous work that we’ve done, the press doesn’t even cover it,” Trump said, flanked by Secretary of State Mike Pompeo and Treasury Secretary Steven Mnuchin.

“The Democrats did this hoax during the United Nations week; it was perfect, because this way it takes away from the tremendous achievements that we’re taking care of doing,” Trump said. “That was all planned, like everything else.”

Trump stressed there was no “quid pro quo” tying Zelenskyy’s revival of the Biden-related investigation to U.S. aid to Ukraine, as some Democrats charged before release of the five-page transcript.

In an earlier appearance with Trump, Zelenskyy said he felt no “push” from Trump on the case.

“In other words, no pressure,” Trump said.

The former vice president’s son, Hunter, sat on the board of a Ukrainian natural gas company for several years, reportedly making $50,000 a month. The elder Biden, vice president under President Barack Obama from January 2009 until January 2017, boasted on camera early last year that he was responsible for the firing of the Ukrainian state prosecutor investigating the company that employed his son.

Trump said in his own press conference that the July 25 call was his second conversation with Zelenskyy, who upset Ukraine’s incumbent president April 21, and that he likely would release the transcript of the first conversation.

Trump said he also planned to release a transcript of a call between the Ukrainian leader and Vice President Mike Pence.

“I can save you a lot of time. They were all perfect; nothing was mentioned of any import other than congratulations,” Trump said. “The word is they [House Democrats] are going to ask for the first phone conversation. You can have it any time you need it, and also Mike Pence’s conversations.”

Trump said he is cautious about releasing conversation between leaders. But, he added, “there was so much fake news” about his call to Zelenskyy that he wanted to set the record straight.

In contrast to what he called a “beautiful” and “perfect” conversation with his counterpart in Ukraine, Trump noted that three Senate Democrats—Robert Menendez of New Jersey, Richard Durbin of Illinois, and Patrick Leahy of Vermont—wrote letters to the Ukraine government calling for it to clean up corruption and take action as a precondition to U.S. aid.

Trump characterized this correspondence as “threats.”