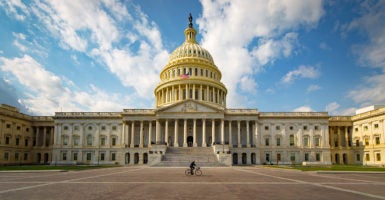 Congress has only weeks before the start of the next fiscal year to authorize military spending. (Photo: Mike Kline/notkalvin/Getty Images)

The leaders of the Armed Services committees of the House and the Senate met Thursday to formally start negotiations on a bicameral version of the National Defense Authorization Act under a conference committee process.

There are substantial differences between the Senate and House versions of the bill that need to be hammered out to create a National Defense Authorization Act that will pass both chambers and strengthen our nation’s military.

It’s important for the conference to build bipartisan consensus and to focus the legislation on setting the military for success in great-power competition.

Among the many issues that the conferees need to agree on is the creation of a Space Force.

Both chambers have provisions outlining what the new force would look like. The most important guiding element is how the new Space Force will enable the United States to protect its critical assets in space.

The establishment of the U.S. Space Command was a good step in that direction, but Congress is responsible for creating an actual military service responsible for the domain.

The 2020 National Defense Authorization Act should represent just the start of congressional work on the Space Force. In future iterations of the bill, Congress needs to start broadening the scope of the Space Force to include space assets that are outside of the Air Force.

Still on Air Force issues, the conference committee needs to decide on how to proceed on the F-15EX procurement.

The House wisely requires the first two aircraft as prototypes and calls on the Air Force to submit reports outlining the sustainment plan for the plane and other details of how the procurement is planned. The Senate, on the other hand, fully authorizes the purchase of eight copies.

It’s important to properly assess the case for the plane and what missions it would fulfill before moving ahead with the purchase.

Another sticking point between the House and Senate is on low-yield nuclear warheads. The House has language that prohibits the use of funds to deploy a low-yield ballistic missile warhead—a mistake that would leave the United States without a rung in the escalation ladder.

Currently, the U.S. does not have a credible response for low-yield nuclear weapons. Our arsenal does not have enough diversity in yield to create fully credible deterrence.

Russia has been in violation of the treaty for years, and the document became a unilateral restraint for the United States. It’s time to start researching and developing how intermediate-range missiles could change the calculations of our adversaries.

The conferees will also need to tackle the canary in the coal mine for investment rebalancing in the Pentagon through what is known as the “night court” process. As part of the rebalancing process, the Army proposed reductions in the advanced procurement funding for upgrading its CH-47F helicopter.

It’s a small change, but it will serve to demonstrate the willingness of Congress to work with the Pentagon to find savings to be reinvested in higher-priority programs.

Secretary of Defense Mark Esper is bringing the night-court process to the whole department, and if he is going to be successful in implementing any of the prescribed changes, he will need congressional cooperation.

The debate over the CH-47F upgrades will be revealing as to how amenable Congress is to actually making choices and properly prioritizing programs.

All these differences need to be addressed within the next week. Lawmakers have a two-week recess scheduled from Sept. 30 to Oct. 15, but fiscal 2020 starts Oct. 1.

The clock is ticking fast on a National Defense Authorization Act for fiscal 2020 to become law before the start of the fiscal year.