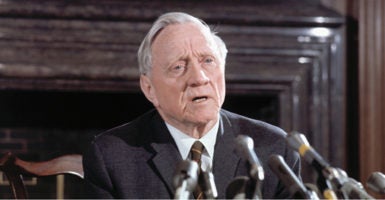 Supreme Court Justice William O. Douglas, then 72, meets briefly with reporters in late 1970 to issue a statement regarding a special House subcommittee's decision to reject impeachment charges against him. (Photo: Bettmann/Getty Images)

Although Democrats’ congressional leadership isn’t embracing the unlikely venture, U.S. history includes one instance of Congress impeaching a Supreme Court justice and two other cases in which lawmakers moved to oust justices—one of whom resigned.

Here’s a look at those three attempts to oust a judge from the high court.

With the election of President Thomas Jefferson, his Democratic-Republican Party swept to big majorities in both houses of Congress. However, the vanquished Federalist Party of former President John Adams still had a grip on the Supreme Court.

President George Washington had named Samuel Chase, a signer of the Declaration of Independence, to the high court in 1796.

The House advanced eight articles of impeachment pertaining to Chase’s work as a trial judge on circuit courts. In those days, Supreme Court justices regularly had the extra duty of serving on the circuit courts.

First, Chase was accused of bias against defendants charged with violating the unpopular Adams-era Alien and Sedition Acts that cracked down on press freedom.

Second, Chase was known for his open partisanship in public forums and on the bench. While on the high court, he publicly campaigned for the reelection of Adams over Jefferson in the 1800 election.

Third, Chase said in a May 1803 address to a Maryland grand jury that Jefferson’s policies would lead to “a Mobocracy, the worst of all possible governments.” Chase was referring in particular to repeal of the Judiciary Act, in which Jefferson’s allies eliminated lower courts with Federalist judges.

The angry president urged Rep. John Randolph of Virginia to lead the effort to oust Chase.

The House voted on March 12, 1804, to impeach Chase on charges of malfeasance. The articles of impeachment accused him of refusing to dismiss biased jurors and limiting defense witnesses in politically sensitive cases.

One article of impeachment accused the Supreme Court justice of “tending to prostitute the high judicial character with which he was invested, to the low purpose of an electioneering partisan.”

The Senate, which took up the trial in January 1805, had the partisan numbers to remove Chase from office. The chamber included 25 Jeffersonians and nine Federalists.

House members who prosecuted the case in the Senate argued that Chase “behaved in an arbitrary, oppressive, and unjust way by announcing his legal interpretation on the law of treason before defense counsel had been heard.”

Adding to the drama: History’s most notorious vice president, Aaron Burr, presided over Chase’s Senate trial as a sort of judge.

This occurred shortly after Burr had killed former Treasury Secretary Alexander Hamilton in an illegal duel. His own actions didn’t stop Burr from lecturing the Senate on proper judicial etiquette.

Burr also frequently interrupted Chase, who at one point broke into tears.

Chase and his legal team argued that the case was entirely about politics. In what continues to be a bone of contention in impeachment debates, they also argued that only indictable offenses, rather than poor judgment or improper behavior, are grounds for impeachment.

At least six Democratic-Republican senators voted with the nine Federalists to acquit Chase on each article of impeachment in March 1805.

A simple majority voted “guilty” on three of the eight articles, but that total was well below the two-thirds needed to remove Chase from office.

Chase continued to serve on the high court until his death in 1811.

President Lyndon B. Johnson nominated Abe Fortas, a Washington superlawyer and longtime friend, to the Supreme Court in 1965. Johnson attempted to make Fortas chief justice in 1968.

However, Fortas fell far short of Johnson’s ambitions for him, becoming the only Supreme Court justice to resign to avoid impeachment under a cloud of scandal.

Fortas initially didn’t want to give up his high-priced lawyer status, but Johnson reportedly insisted: “I’m sending 50,000 boys to Vietnam and I’m sending you to the Supreme Court.”

Fortas took a massive pay cut by going to a $39,500 annual salary from his usual $200,000 per year. He supplemented his court salary in other ways, and this would lead to trouble.

Even while serving on the high court, Fortas reportedly continued to advise Johnson on matters such as steel price increases, transportation strikes, and, increasingly, the war in Vietnam. He would relay messages on Johnson’s behalf and defended himself by asserting that he was still a citizen.

Johnson nominated Fortas as chief justice to replace retiring Chief Justice Earl Warren in 1968. But Republicans and some Democrats questioned what at the time seemed like an excessive $15,000 that Fortas received to teach at American University while sitting on the high court.

Republicans also questioned whether the jurist was too political. After a Senate filibuster, Johnson withdrew his nomination of Fortas for chief justice and his friend continued to serve on the court.

Beginning in 1966, Fortas took a $20,000 annual retainer fee from the Wolfson Foundation and arranged for his wife to receive the payment each year after his death.

The payments came at a time when Wolfson himself was under federal investigation. For the payment, Fortas offered legal advice and attended an annual meeting.

After Wolfson was indicted on charges of securities fraud and later convicted, Fortas returned the money.

Wolfson hoped to get his conviction for securities fraud overturned. Fortas wrote a letter to the White House promoting two of Wolfson’s companies at a time when the companies were under federal investigation.

Members of Congress threatened impeachment and called for his resignation. When Johnson chose not to run for reelection and Richard Nixon was elected president in November 1968, Fortas had lost a buffer of political protection.

To avoid impeachment, he resigned from the court in May 1969.

Fortas later said he “resigned to save Douglas,” a reference to friend and colleague Justice William O. Douglas, who was also under investigation for a similar financial scandal.

Fortas continued to deny any wrongdoing and was never charged with corruption. He returned to practicing law and argued cases before the high court before his death in 1982.

Justice William O. Douglas has come the closest to being impeached by the House in modern times, after an investigation pushed by then-House Minority Leader Gerald Ford, R-Mich., which eventually fizzled.

President Franklin Roosevelt nominated Douglas to the high court in 1939.

Though Democrats held a decisive majority in Congress in 1970, impeaching a liberal justice from the New Deal era wasn’t entirely out of the question. Douglas had a reputation as a philanderer with shady financial connections that could pose serious conflicts of interest on the bench.

Douglas had survived a 1953 impeachment effort, when some House members tried to force him out for granting a stay of execution for convicted spies Julius and Ethel Rosenberg while the Supreme Court was in recess. The full court held a special session and reversed Douglas’ action, and the convicted spies were executed.

Although the effort to oust Douglas over the Rosenbergs went nowhere, the financial issues presented a possible problem.

Ford called Douglas out for $12,000 in payments from a hotel and casino owner. He said Douglas’ lifestyle “defied the conventions and convictions of decent Americans.”

In a floor speech in April 1970, Ford called Douglas “unfit” to serve on the Supreme Court, saying: “I would vote to impeach him right now.”

Ford accused the justice of “hippie yippie style revolution” for writing articles for pornographic magazines, and of links to “gamblers and underworld figures.”

Ford gained some bipartisan backing, as 52 Republicans and 52 Democrats supported a special committee to review the matter.

In making his case, the Ford later uttered what became famous words as he described impeachment as more of a political than a legal matter.

“An impeachable offense is whatever a majority of the House of Representatives considers it to be at a given moment in history,” the future president asserted. “Conviction results from whatever offense or offenses two-thirds of the other body [the Senate] considers to be sufficiently serious to require removal of the accused from office.”

House Judiciary Chairman Emanuel Celler, D-N.Y., created a subcommittee to investigate Douglas. During the process, critics of the subcommittee, composed of three Democrats and two Republicans, complained that it held no public hearings and didn’t put witnesses under oath.

After about seven months of investigation, the subcommittee voted in December that there were no grounds for impeachment.

In a political irony, Ford—who ascended to the presidency after Richard Nixon resigned in August 1974 to avoid impeachment—nominated Douglas’ replacement, John Paul Stevens.