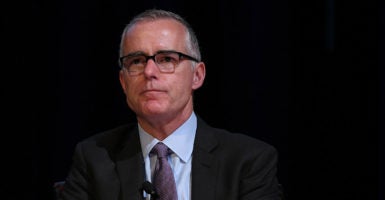 "I never intentionally misled anyone about anything, and I will not stand up and claim that I’ve done something that I didn’t do,” former FBI Deputy Director Andrew McCabe says. Pictured: McCabe presents onstage at the American Jewish University March 14, 2019, in Los Angeles. (Photo: Michael Kovac/Getty Images)

A defiant Andrew McCabe said Tuesday he will not “under any circumstances” accept a plea deal if indicted for lying about leaks to the press.

Federal prosecutors in Virginia are pushing for charges against McCabe, a former FBI deputy director, for allegedly making false statements to the FBI and Justice Department’s Office of the Inspector General regarding his authorization of a leak to the media in October 2016.

“Will you take a deal in order to go on with the rest of your life if there is no big criminal attachment—you don’t have to do any time or anything like that?” CNN’s Chris Cuomo asked McCabe in an interview.

“Absolutely not, under any circumstances,” said McCabe, who joined CNN as an analyst Aug. 23.

“Absolutely not, under any circumstances,” McCabe repeated.

“I have said to you, I said from the very beginning, I absolutely reject that report because I never intentionally misled anyone about anything, and I will not stand up and claim that I’ve done something that I didn’t do.”

The Justice Department informed McCabe earlier in September that it had rejected his last-ditch effort to appeal future charges, an indication that he could soon be in indicted. He has yet to be indicted in the case, though a grand jury reportedly reconvened earlier in September after many months on hiatus.

But McCabe said he denied doing anything wrong, or of intentionally misleading investigators.

“To be clear, I absolutely … reject the findings and conclusions of the IG report that accused me of exhibiting a lack of candor in several instances,” McCabe told Cuomo.

“I never intentionally misled anyone about anything and I certainly have not committed a crime.”

McCabe was fired from the FBI on March 16, 2018, after the Office of the Inspector General and FBI’s Office of Professional Responsibility recommended doing so. He sued the FBI and Justice Department on Aug. 8, saying he was fired because of political pressure from President Donald Trump.