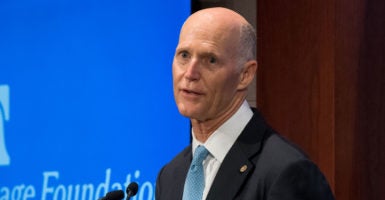 Not every student should go to a four-year college, but those who do deserve an education that prepares them for a career without taxpayers shouldering their loan debt, Sen. Rick Scott, R-Fla., said Tuesday in outlining legislative proposals to reform higher education.

Scott, a former health care CEO who hopes to build on improvements he made as Florida governor, said his proposals provide options for a “serious discussion” of how to make a college education both more affordable and more attuned to the 21st-century economy.

Proposals by Democrats to cancel student-loan debt are nonstarters, the freshman senator said in a speech at The Heritage Foundation on Capitol Hill.

“Let me be clear to all our Democrat friends: Eliminating all student-loan debt is not a serious proposal,” Scott said. “It’s a slap in the face for those who have worked hard and paid off their student loans or are in the process of doing so. And it creates incentives for the bad behavior to continue.”

Explaining that behavior, the Florida Republican said colleges and universities, along with government loan guarantees, produce increases in school budgets and tuition and “bloated bureaucracies,” but not necessarily graduates who are ready to begin a career.

Scott said that his series of bills, which a spokesman said would be introduced in coming weeks, would be designed “to drive down costs and ensure students are prepared to get jobs.”

He said the bills would:

—Make a college or university responsible for a portion of any student’s default on a federal loan, starting at 1% and growing to 10% after 10 years.

—Apply the same rules to for-profit and nonprofit education institutions, holding them to the same performance standards in preparing students for jobs.

—Automatically cut off from federal funding any college or university that raises tuition or fees, including federally guaranteed loan programs.

—Allow students to use Pell Grants at technical colleges, so students can get on the path to the high-demand job they seek, rather than the one a four-year school “wants them to get.”

—Eliminate all Obama administration regulations that hinder private lenders from making student loans, so taxpayers aren’t on the hook for loan debt.

In response to a question from the audience, Scott said he hasn’t spoken with President Donald Trump about his specific proposals, but hopes to win Trump’s support as liberals argue “to give out money—your money—with no results.”

He outlined his legislative proposals after recapping discouraging national trends in higher education and what he did as Florida governor to hold colleges and universities accountable.

According to U.S. government data, the cost of tuition and textbooks has jumped by nearly 200% in the past 20 years, rising at almost four times the rate of inflation. It is now almost impossible for a student to work his or her way through college, Scott said.

Student-loan debt totals close to $1.6 trillion, and in the past three years, the delinquency and default rate has topped 11%, he said.

Florida’s 48 technical schools, for example, agreed to guarantee businesses that they would foot the bill for retraining graduates if they weren’t prepared to work.

The result of such reforms, Scott said, is that Florida’s higher education system was rated No. 1 for three years in a row by U.S. News & World Report and boasts the second-lowest state tuition in the nation, after Wyoming.

“I hope we can get something done to fix the problems in higher education, and I absolutely believe all this is doable,” he said, adding:

Our higher-education system doesn’t serve the student, and we need to change that. They’ve got to be focused on their customer, which is the student. …

I fear that if we stay on the path we’re on, it will be harder and harder for some of our best students to get the education and the opportunity they deserve. The Democrats are proposing policy plans that would bankrupt and destroy our country.

Republican-sponsored legislation currently before Congress would institute some related reforms.

Called the Higher Education Reform and Opportunity Act, or HERO Act, the measure would encourage states to set up their own accreditation systems for colleges, individual courses, apprenticeship and vocational training programs, and curricula, according to a summary from Heritage’s lobbying arm, Heritage Action for America. (The Daily Signal is Heritage’s multimedia news organization.)

The proposal, sponsored in the Senate by Utah’s Mike Lee (S 2339) and in the House by Florida’s Francis Rooney (HR 4098), also would make it easier to measure outcomes for students,  simplify federal student-loan programs, and hold universities partially accountable for high rates of default on student loans.

Heritage Action announced Monday that it would include co-sponsorship of the measure as a key vote on its legislative scorecard, asserting:

Each proposal contained within the HERO Act would put downward pressure on the rising cost of college by increasing choice, competition, and price transparency. The act would also create alternative pathways to four-year degrees, empowering students to gain the vocational and skills-based education needed to successfully enter the workforce without excessive student-loan debt.

“The left is over the target, [but] completely wrong in how they’re doing it,” Heritage Action Executive Director Tim Chapman said during a discussion with Scott following the senator’s remarks Tuesday morning.

Chapman said he is concerned that liberals’ proposals would hurt those they’re designed to help.

The factors to stay focused on, Scott said, are the cost of getting a degree and whether students graduate and get a good job.

Parents, grandparents, and hardworking students, he said, “deserve a serious discussion about a path forward on an issue so important to many.”