US Taxpayers Foot $2 Billion Bill for 30,000 Public Employees in Baltimore 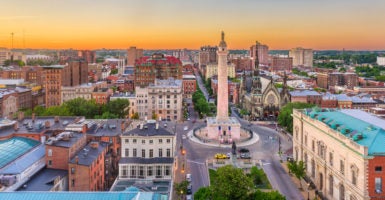 American taxpayers have paid for nearly $2 billion in federal aid to fund 30,000 public employees in Baltimore at local and federal levels, an audit shows.

Baltimore reportedly has 13,522 employees with a combined payroll that exceeds $821 million annually. The mayor’s office paid $7 million in 2018 for the salaries of 111 employees and $1 million for public relations fees, according to an investigation conducted by auditors at OpenTheBooks.com.

“We found the city drowning in taxpayer dollars,” Open the Books CEO Adam Andrzejewski wrote in an editorial published Wednesday in Forbes.

“Based on our audit, one fact seems clear,” Andrzejewski wrote. “If more money for public employees was the answer, Baltimore’s challenges would have been solved long ago.”

A total of $1.1 billion in federal grants and direct payments went to Baltimore city agencies, nonprofit organizations, corporations, and colleges from fiscal year 2015 to fiscal year 2018.

“Baltimore has received a lot of federal money over the last five years. The problems in Baltimore [are] not for lack of money. It’s for lack of leadership,” David Williams, president of the Taxpayers Protection Alliance, told Fox Baltimore.

The number of state employees in Baltimore, which has a population of about 620,000, is not known because Maryland’s comptroller did not disclose work locations to Open the Books.

Baltimore received $5.44 billion worth of federal aid in contracts, grants, and other financial assistance for fiscal year 2018, according to USAspending.gov, Fox Baltimore reported Thursday.

The Baltimore congressional district of Rep. Elijah Cummings, D-Md., received more than $9 billion in 2018 and more than $15 billion in total between 2018 and 2019, according to the outlet.

President Donald Trump came under fire for July 27 tweets accusing Cummings of not taking care of his Baltimore district and for calling it the “worst run and most dangerous anywhere in the United States.”

Why is so much money sent to the Elijah Cummings district when it is considered the worst run and most dangerous anywhere in the United States. No human being would want to live there. Where is all this money going? How much is stolen? Investigate this corrupt mess immediately!

The president doubled down in a July 29 tweet, writing: “Baltimore’s numbers are the worst in the United States on Crime and the Economy. Billions of dollars have been pumped in over the years, but to no avail. The money was stolen or wasted. Ask Elijah Cummings where it went. He should investigate himself with his Oversight Committee!”

Baltimore’s numbers are the worst in the United States on Crime and the Economy. Billions of dollars have been pumped in over the years, but to no avail. The money was stolen or wasted. Ask Elijah Cummings where it went. He should investigate himself with his Oversight Committee!