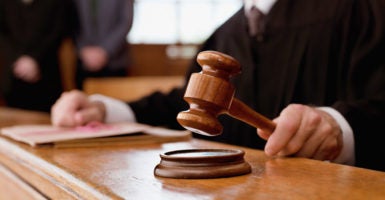 Speaking of the judiciary:

Two nights of debates, zero questions about the Supreme Court.

“For too long, fairly uncontroversial judicial nominees just like these have been held up and delayed by our Democratic colleagues even when the vacancy qualifies as a judicial emergency,” Senate Majority Leader Mitch McConnell, R-Ky., said Wednesday during a speech on the Senate floor, The Hill reported.

Those confirmed include the following district court nominees:

Senate Republicans have confirmed more than 100 Trump court picks since 2017, including Supreme Court Justices Brett Kavanaugh and Neil Gorsuch, as well as a record number of appeals court judges.

Trump accused Democrats of obstructing his nominees earlier this year.

“Democrats in the Senate are still slow walking hundreds of highly qualified people wanting to come into government,” the president said in a February tweet. “Never been such an abuse in our country’s history.”

Sections of the new book “Justice on Trial” by Mollie Hemingway and Carrie Severino reveal how 2016 Trump campaign lawyers consulted with retired Supreme Court Justice Anthony Kennedy in an effort to build a list of prospective Supreme Court nominees ahead of Trump’s election.