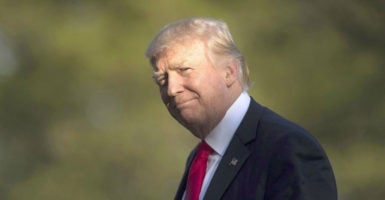 The first time that “the First 100 Days” was used as a political yardstick was in 1933 during President Franklin D. Roosevelt’s first months in office.

America was in the midst of a Great Depression with 25 percent of the adult population unemployed, gross domestic product down 90 percent since 1929, and the stock market in free fall.

Americans were panic stricken. They looked to the new president and an overwhelmingly Democratic Congress to act.

FDR knew that he could do just about anything. Declaring that the federal government has “a continuous responsibility for human welfare,” he set a record by signing 76 bills, of which at least nine were major pieces of legislation affecting financial institutions, agriculture, employment, and the price of everyday goods.

It was the birth of the welfare state.

Since then, only President Lyndon B. Johnson has come close to FDR’s first 100 days, signing bills in the first three months of 1965 that created Medicare and Medicaid, established the principle of federal aid to public schools, and declared a “War on Poverty.”

If we apply “the First 100 Days” as a criterion, President Ronald Reagan was a failure.

He did not sign the Economic Recovery Tax Act of 1981 until Aug. 17—that is, in the first 200 days of his presidency. And the across-the-board tax cuts of the law did not have a significant economic impact until the first months of 1983 in the first 730 days of the Reagan presidency.

The situation today is far different from the desperate days of the early 1930s or the stultifying “malaise” of the early 1980s. While we face serious economic problems at home and determined adversaries abroad, America is not in a state of national emergency.

What we do face, and it affects profoundly the plans and programs of the Trump administration, is a divided America—divided politically, economically, culturally.

Not since the 1960s have Americans differed so widely and so passionately on the issues of the day—taxes, immigration, and jobs—and the central political question of our time: “Just how big do we want our government to be?”

Complicating President Donald Trump’s task is the slim Republican majority in the Senate that tends to work against bold reform like the repeal of Obamacare.

Most of the mass media have decided that Trump’s accomplishments trail far behind other recent presidents. While conceding that he has signed some 28 bills into law and issued 32 executive orders, the media insist they are of minor importance or of a housekeeping nature.

But if that is true, why did a Washington Post-ABC poll report that only 4 percent of Trump voters say he is not keeping his major campaign promises?

Conservatives should not rush to judgment—certainly not the judgment of the mainstream media whose ideological prejudice becomes more obvious every passing day.

A more prudent course is to wait until the first 180 days pass, then take the measure of the man and his presidency.

Conservatives should borrow from the wisdom of the Chinese leader Chou Enlai, who, when asked about the impact of the French Revolution of 1789, is alleged to have replied, “It’s too early to say.”