Trump Wins Big in Emoluments Lawsuits: 2 Down and 1 to Go 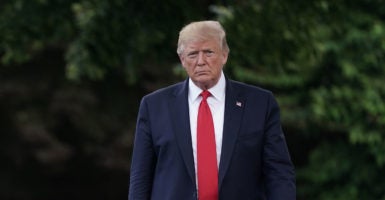 President Donald Trump has won the second of three lawsuits alleging he violated the Constitution because foreigners and state officials patronize his businesses, such as the Trump Hotel in Washington, D.C.

The 4th U.S. Circuit Court of Appeals dismissed the claim by Maryland and the District of Columbia that Trump was violating the Constitution’s domestic and foreign emoluments clauses.

No Title of Nobility shall be granted by the United States: And no Person holding any Office of Profit or Trust under them, shall, without the Consent of the Congress, accept of any present, Emolument, Office, or Title, of any kind whatever, from any King, Prince, or foreign State.

The President shall, at stated Times, receive for his Services, a Compensation which shall neither be increased nor diminished during the Period for which he shall have been elected, and he shall not receive within that Period any other Emolument from the United States, or any of them.

In throwing out this latest suit, the 4th Circuit chastised the plaintiffs for wasting the court’s time with a plainly meritless case.

The court also scolded federal Judge Peter Messitte, a Clinton appointee, for not throwing out the case sooner and for refusing to let the president appeal his erroneous rulings.

Messitte’s faulty reasoning “blinks reality,” the court said, and his actions “amounted to a clear abuse of discretion.”

Messitte’s rulings were so erroneous that the 4th Circuit didn’t even wait for an appeal. It accepted the president’s request for writ of mandamus—a rarely granted procedural tool that allows early review of an otherwise nonappealable issue—to take the case away from Messitte, reverse his rulings, and force him to throw the case out for good, without the possibility of further appeal.

The lawsuit alleged that, because government employees and foreign officials pay for services they receive from Trump’s businesses, payment produces a constitutionally forbidden “present” to the president.

The court held that Maryland and the District’s interest in the case was “abstract” and “simply too attenuated” for the case to proceed.

Maryland and the District argued that they are harmed by the alleged constitutional violation because the Trump Hotel “competes” with conference centers and hotels they own. Which, of course, brings up a question not dealt with in the lawsuit: Why are Maryland and D.C. involved in the conference and hospitality industry to begin with and competing with private industry?

Their claims rested on the speculation (accepted at face value by Messitte) that government officials patronize the Trump Hotel because it distributes profits to the president and not for any other reason.

Regardless, courts don’t decide cases based on speculations.

What’s more, Maryland and the District couldn’t explain how prohibiting the president from earning money from the hotel would stop government officials from going there. In other words, even if they had a viable legal claim, there is no possible remedy.

Assuming that foreign officials were trying to curry the president’s favor by staying at his hotel, the hotel is associated with him and would financially benefit his family even if it didn’t benefit him—and the emoluments clauses have no application to the family members of a federal official.

The 4th Circuit found this a fatal flaw in the plaintiffs’ argument and noted that the lawyer for Maryland and the District was “repeatedly unable to articulate the terms of the injunction” that was being sought to remedy the supposed violation of the Constitution.

As the court expostulated, “when plaintiffs before a court are unable to specify the relief they seek, one must wonder why they came to the court for relief in the first place.”

The only other interest that Maryland or the District had in the case was “a general interest in having the law followed.” And a plaintiff “raising only a generally available grievance about government” has no right to do so in court.

So ended the second of three emoluments clauses cases. The president won the first case in 2017 when a federal court in New York tossed out an almost identical lawsuit filed by Citizens for Responsibility and Ethics in Washington, a liberal advocacy organization.

One emoluments case remains, this one before federal Judge Emmet Sullivan in the District of Columbia. In that case, Democratic members of Congress, including Sen. Richard Blumenthal, D-Conn., personally sued the president for allegedly violating the foreign emoluments clause.

In an order reminiscent of Messitte’s “clearly erroneous” orders, Sullivan simply accepted the speculation—with no supporting evidence—that foreign officials are staying at the Trump Hotel only because it pays the president part of its profits.

Sullivan then went on to say that congressional Democrats have a personal interest in the case because—and now hang on, because this is wild ride—the president, by accepting the alleged foreign payments, has denied Congress, as an institution, the right to vote on these payments.

You might wonder how Sullivan made the logical leap from the Democrats’ personal interest to Congress’ institutional interest. Sullivan answers that question by calling that distinction “relevant … but not dispositive.”

That case is ongoing, and Sullivan is letting the congressional Democrats subpoena the president’s financial information. Additionally, Sullivan recently denied the president’s request to delay the case while he appeals.

Political fights belong in the political arena. As the 4th Circuit said here, the claims made by Maryland and the District were “so attenuated and abstract that the prosecution of this case readily provokes the question of whether this action against the President is an appropriate use of the courts.”

It isn’t. And in light of the 4th Circuit’s opinion, perhaps the president should seek another writ of mandamus in the D.C. Circuit to overrule what is clearly an erroneous decision by Sullivan.