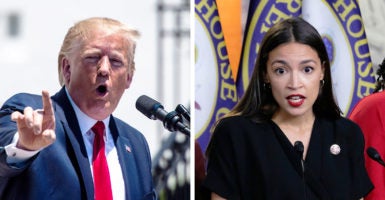 President Donald Trump and "The Squad," which includes Rep. Alexandria Ocasio-Cortez, D-N.Y., are in a heated debate after a racially charged tweet from the president. (Photos: Jabin Botsford/The Washington Post/Getty Images and Alex Wroblewski/Getty Images)

President Donald Trump clearly enjoys his unfiltered ability to communicate directly with the American people. But because of a racially charged tweet Sunday morning, he’s stirred hurtful memories among minorities and done a grave disservice to himself.

Trump’s policies have been welcome news for many minorities in America. Unemployment rates for blacks and Hispanics have reached record lows. His administration favors and prioritizes school choice—a key issue for low-income children, many of whom are minorities, and who need a private or charter school to have a real chance at getting a great education.

Yet thanks to a few careless words, seemingly targeted at four female minority Democrats, we are now once again in a news cycle fixated on whether Trump is a racist.

Believe me, there is plenty for Trump to criticize these four lawmakers, who call themselves “The Squad” about. But he doesn’t need to use ad hominem attacks to do it.

There’s an ample mixture of bad policies and divisive rhetoric from these four.

Plenty of these policies would also have implications for the very people “The Squad” asserts it represents. “By one estimate, that Green New Deal would cost $600,000 per household and eliminate the use of all fossil fuels in just 10 years. It would result in higher energy prices for all Americans, but would disproportionately hurt people of color and other minorities who are the most susceptible to energy poverty,” wrote Derrick Hollie for The Daily Signal earlier this year.

Trump could use his platform to make the case that it’s his policies, not the left’s, that would help minorities the most in the United States. He could undermine the media’s perpetual message that big government solutions are the only way to increase opportunity and prosperity.

He could also highlight that the big government and pro-socialism inclinations of “The Squad” aren’t rooted in our founding principles, which focus on less government power, and certainly less centralized government power—and also have a healthy skepticism of human nature that socialist advocates lack.

Unfortunately, Trump didn’t do any of that. Instead, by suggesting these minority lawmakers “go back and help fix the totally broken and crime infested places from which they came,” he seemingly promoted the attitude that whiteness and Americanness are related.

Instead of unifying the country, he promoted an ugly idea.

“Instead of sharing how the Democratic Party’s far-left, pro-socialist policies—not to mention the hateful language some of their members have used towards law enforcement and Jews—are wrong for the future of our nation, the president interjected with unacceptable personal attacks and racially offensive language,” said Sen. Tim Scott, R-S.C., in a statement. “No matter our political disagreements, aiming for the lowest common denominator will only divide our nation further.”

Yes, the media is biased. No doubt if a Democrat had told Housing and Urban Development Secretary Ben Carson or Transportation Secretary Elaine Chao or Sen. Marco Rubio to “go back,” we’d have a far less intense news cycle—and one far more willing to give the Democrat benefit of the doubt.

Yes, conservative columnist Michelle Malkin, who is Asian, tweeted that she is regularly targeted by liberals with similar messages:

Yes, Trump is never given credit for what he does that benefits minorities.

And yes, the media unfairly and regularly smear conservative policies as racist that are not racist at all, such as securing the border and not allowing illegal immigrants in the country.

All that can be true—and so can that Trump crossed a line he shouldn’t have in his tweets.

Our country has richly benefited from the immigrants who have come to America, and Trump, as a husband of one immigrant and the child of another, no doubt knows that well.

Now is Trump’s moment to remind Americans of what is great about our country and how his policies—not those from “The Squad”—are benefiting people in ways we haven’t seen in decades.