Not a ‘Racist Bone in My Body’ Says Trump, as Pelosi Urges House to Condemn 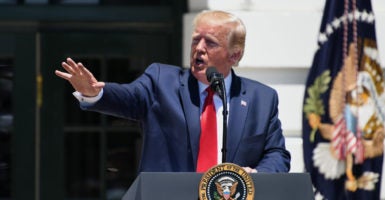 President Donald Trump is pushing back against critics of the tweets he posted Sunday, saying that they were not inappropriate or racist, even as House Speaker Nancy Pelosi promotes a resolution condemning the president.

“Those Tweets were NOT Racist,” Trump tweeted Tuesday, referring to tweets where he called out “’progressive’ Democrat Congresswomen, who originally came from countries whose governments are a complete and total catastrophe.”

“I don’t have a Racist bone in my body,” Trump tweeted Tuesday. “The so-called vote to be taken is a Democrat con game. Republicans should not show ‘weakness’ and fall into their trap,” Trump said, adding:

This should be a vote on the filthy language, statements and lies told by the Democrat congresswomen, who I truly believe, based on their actions, hate our Country. Get a list of the HORRIBLE things they have said. Omar is polling at 8 percent, Cortez at 21 percent. Nancy Pelosi tried to push them away, but now they are forever wedded to the Democrat Party.

While Trump did not name which lawmakers he was referring to, it is believed he was targeting a group of four liberal lawmakers: Reps. Alexandria Ocasio-Cortez of New York, Ilhan Omar of Minnesota, Ayanna Pressley of Massachusetts, and Rashida Tlaib of Michigan.

The four women denounced Trump in a press conference Monday, with Omar saying of Trump, “He’s launching a blatantly racist attack on four duly elected members of the United States House of Representatives, all of whom are women of color. This is the agenda of white nationalists.”

House Speaker Nancy Pelosi, D-Calif., is asking Democrats and Republicans to sign on to a resolution condemning Trump’s tweets.

“The House cannot allow the president’s characterization of immigrants to our country to stand,” Pelosi wrote in the “Dear Colleague” letter.

Such a letter is official correspondence from a member of the House or Senate that is circulated to other congressional offices.

“Our Republican colleagues must join us in condemning the president’s xenophobic tweets,” she said, adding:

Please join us in supporting a forthcoming resolution sponsored by Congressman Tom Malinowski, who was born abroad, and Congressman Jamie Raskin, along with other Democratic members born abroad referencing President Ronald Reagan’s last speech as president in which he said,

‘Thanks to each wave of new arrivals to this land of opportunity, we’re a nation forever young, forever bursting with energy and new ideas, and always on the cutting edge, always leading the world to the next frontier … If we ever closed the door to new Americans, our leadership in the world would soon be lost.’

“This is all about politics and beliefs of ideologies,” he added, according to USA Today.