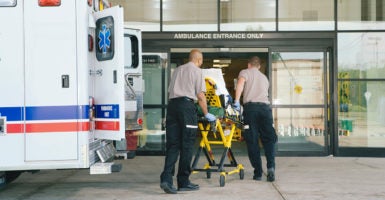 A patient treated in an emergency room may receive a “surprise” bill from a non-network physician. (Photo: FangXiaNuo/Getty Images)

Congress is rushing legislation on “surprise medical bills” that is conceptually flawed, legally dubious, and which could have profound and far-reaching consequences for the private practice of medicine.

At issue are medical bills that consumers receive from providers who aren’t part of their health plan’s network.

For example, patients who schedule a procedure to be performed by a doctor covered by their health plan’s network at a facility also covered by their plan can receive a “surprise” bill from another physician, such as an anesthesiologist, who isn’t in the patient’s plan. A patient treated in an emergency room similarly may receive a “surprise” bill from a non-network physician.

These surprise bills make patients accountable for the difference between what the non-network physician bills them and the amount their insurer pays, a practice known as balance billing.

Patients who expected to pay in-network cost-sharing rates instead can be hit with medical bills totaling thousands of dollars that their insurance companies won’t help pay.

Congress wants to ban surprise bills for emergency care and for nonemergency care delivered in network facilities. It would do well, instead, to develop a fuller understanding of the problem before acting.

The bipartisan measures would compel physicians and others not in the patient’s network to accept an insurer’s median network payment rate when they provide care in an emergency department or at a network facility.

The legislation also would prohibit balance billing for emergency treatment and for care provided in network facilities.

In short, the federal government would bind doctors and hospitals to the terms of contracts they haven’t signed.

The measures Congress is considering would tilt the system in favor of insurers by compelling doctors and other providers to accept payment rates that the insurer was unsuccessful in negotiating with them. The government-imposed price is unlikely to match the market price.

This would create powerful incentives for insurers to reduce reimbursement of network providers and narrow their networks, knowing that those who refuse to sign contracts still would have to accept their median network rates.

Hospitals and doctors can raise credible claims that the federal government is curbing their freedom to contract. And since the federal government requires hospitals to treat anyone who enters their emergency rooms, limiting their ability to collect fair compensation for government-mandated services lends added weight to their constitutional claims.

Should this mandate win enactment and withstand legal scrutiny, its implications could be far-reaching and long-lasting.

If enforcing contractual terms against noncontracting providers is viewed as a “patient protection” in these circumstances, Congress likely will seek to extend these “protections” to others.

An across-the-board ban on balance billing would be politically popular, cheered by insurers, employers, and consumers alike as an antidote to rising health care costs.

Such a sweeping federal encroachment would have deleterious effects.

The balance billing restriction is a limitation on the right of doctors and patients to freely contract but one that at least is confined to a federal program. A doctor unhappy with those terms can refuse to see Medicare patients.

If Congress banned balance billing in the commercial insurance market, physicians couldn’t practice medicine without forfeiting their right to set rates for their services.

The federal government is a hyperkinetic regulator of health care, but it has stayed out of contract negotiations between private insurers and providers. Congress should not cross that boundary.

Patients rightly expect not to be financially penalized when they seek care in an emergency room or at a network facility. Congress rightly wants to address this problem, but the solutions it has so far contemplated are ill-conceived.

Providers and insurers, both of whom benefit from surprise bills, have advanced competing proposals that protect their respective interests.

Instead of choosing between flawed solutions advanced by those who profit from the problem, Congress should devise market-oriented proposals that preserve the freedom to contract.

Members should inquire more extensively into the nature, extent, and causes of the surprise billing problem.

Gaining a better understanding of why this is happening might lead to a more carefully crafted policy response.

More broadly, Congress should move beyond its paternalistic attitude toward patients. It should tear down regulatory barriers that prevent consumers from wielding the same economic power in health care as they do in the rest of the economy.

The best way to protect patients is to let them protect themselves through greater transparency, more information, and more freedom and autonomy over their medical spending.

Patient empowerment is the best protection of all.