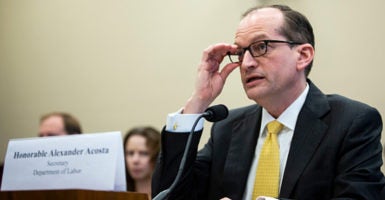 Labor Secretary Alex Acosta testifies at a House committee hearing on the Labor Department budget for fiscal 2020 on April 3. Acosta now faces calls for his resignation over his handling as a federal prosecutor of a 2008 plea deal with billionaire Jeffrey Epstein. (Photo: Al Drago/Getty Images)

Amid Democratic congressional leaders demanding his ouster, and a leading Senate Republican suggesting the need for hearings, Labor Secretary Alex Acosta addressed the plea agreement he made as a federal prosecutor in 2008 with billionaire sex offender Jeffrey Epstein.

Acosta said in the first of a series of tweets Tuesday, “The crimes committed by Epstein are horrific, and I am pleased that NY prosecutors are moving forward with a case based on new evidence.”

“With the evidence available more than a decade ago, federal prosecutors insisted that Epstein go to jail, register as a sex offender, and put the world on notice that he was a sexual predator,” Acosta wrote. “Now that new evidence and additional testimony is available, the NY prosecution offers an important opportunity to more fully bring him to justice.”

On Monday, federal prosecutors in New York charged Epstein, a billionaire financier, with the sex trafficking of dozens of young girls, some as young as 14 years old.

In 2008, Acosta was serving as a U.S. attorney for the Southern District of Florida.

Epstein reached a deal that year with federal prosecutors in the Southern District of Florida that allowed him to avoid federal prosecution in a case involving multiple charges of sexual abuse, in exchange for pleading guilty in a lower Florida state court to charges of procuring a minor for prostitution and felony solicitation.

He was placed on the sex offender registry and sentenced to one year in county jail. Epstein was allowed to leave daily for work release, according to the Miami Herald.

The Herald revisited the 2008 decision last November, insinuating the deal was inappropriate in a series of articles labeled “Perversion of Justice”:

In 2007, the FBI had prepared a 53-page federal indictment charging Epstein with sex crimes that could have put him in federal prison for life. But then-Miami U.S. Attorney Alexander Acosta signed off on a non-prosecution agreement, which was negotiated, signed and sealed so that no one would know the full scope of Epstein’s crimes. The indictment was shelved, never to be seen again.

Epstein instead pleaded guilty to lesser charges in state court, and was required to register as a sex offender.

Trump defended his Cabinet official in an Oval Office press pool gaggle, but also said the administration is reviewing the matter.

“I feel very badly, actually, for Secretary Acosta, because I’ve known him as someone who works so hard and has done such a good job. I feel very badly about that whole situation,” Trump told reporters. “But we are going to be looking at that and looking at it very closely.”

I do hear there were a lot of people involved in that decision, not just him. I can only say this, from what I know, he has been a great, really great secretary of labor. The rest of it, we’ll have to look at. We’ll have to look at it very carefully.

You’re talking about a long time ago. It was a decision made, I think, not by him, but by a lot of people. We’ll be looking at that very carefully.

The president downplayed his own association with Epstein.

“I knew him, like everybody in Palm Beach knew him. He was a fixture in Palm Beach. I had a falling out with him a long time ago. I don’t think I’ve spoken to him for 15 years. I wasn’t a fan,” Trump said.

“If this plea deal doesn’t withstand scrutiny, then it would be the job of the Judiciary Committee to find out how it got off the rails,” Graham said Tuesday, adding:

What kind of checks and balances do we have to make sure that complaints involving minor children are adequately investigated?

This is an area of the law where the tie goes to the kids.

If we think somebody’s out there abusing children, no matter how hard the case may be, you want to bring it forward, simply to get these people deterred, if nothing else.