What the Media’s Selective Silence on Antifa Attack Proves 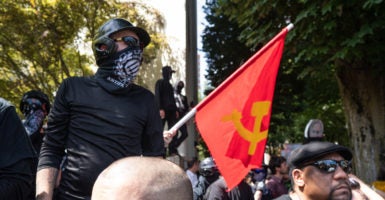 Members of Antifa and other left-wing protesters take to the streets of Portland on Aug. 4, 2018. Journalist Andy Ngo was recently attacked by Antifa protesters while covering a Portland rally. (Photo: Kainoa Little/SOPA Images/LightRocket via Getty Images)

Elad Vaida is a writer in Washington, D.C., whose work has appeared in The National Interest, American Greatness, and The New Lyceum. He is a graduate of Harvard University’s program in Middle Eastern Studies.

The muted media response to Antifa’s attack on Andy Ngo, a journalist who was covering an Antifa protest in Portland last week, demonstrates why the media is quickly losing credibility among Americans.

There was little coverage of the attack, which left Ngo hospitalized with a brain hemorrhage. Even outlets that covered the assault, like Yahoo News, published headlines like “Right-wing protesters, ‘antifa’ clashes bring chaos to streets of Portland, Oregon,” which sounds much more neutral than “Antifa bashes journalist.”

Compare that with the coverage of a Trump rally in El Paso that took place in February, where a BBC journalist was shoved by a Trump supporter. Though Trump had nothing to do with the incident, and though the White House later condemned the “act of violence,” multiple publications, including the Washington Post, BuzzFeed, USA Today, The Guardian, and the BBC all portrayed the attack as a natural consequence of President Donald Trump’s criticism of the media.

Given this sensitivity to journalists’ safety, you would think that fellow journalists would rush to condemn the attack on Ngo and defend one of their own, even someone who does not share their political views. Instead, the mainstream media generally delivered silence.

Notably, Jake Tapper and Brian Stelter of CNN called the attack “reprehensible” and “unacceptable,” and they should be commended for it. CNN later interviewed Ngo about the incident live on-air.

Nonetheless, the overall media response has been muted.

This is especially striking considering the times we live in. Every small criticism uttered by Trump against the media is upheld as an example that democracy is collapsing, that freedom of speech is under attack, and that Trump is on the cusp of rounding up journalists and abolishing the free press.

After all, if Trump is really a tyrant, he’s doing a very poor job of it. Why else would he allow 90% of all media coverage of him to be negative? Why does he react by ranting on Twitter, instead of throwing reporters in jail?

The very fact that the mainstream media is so openly and virulently anti-Trump is a testament to the resilience of our democracy, if not to the honesty of the media. Adolf Hitler and Josef Stalin weren’t well-known for giving frequent and transparent press conferences, and it’s hard to imagine either of them letting someone like Acosta run around with impunity.

>>> Big Media Is Plotting to Take Down Trump. What Can You Do?

This sad incident proves that the media doesn’t really care about press freedom—at least not press freedom for everyone. If they really cared, they would stop analyzing every one of Trump’s tweets for proof of authoritarian intent, and actually defend journalists who are viciously assaulted for doing their jobs.

Until the media course-corrects and fulfills its role as an honest watchdog of our republic, the American people will continue seeing it as a joke—and rightly so.