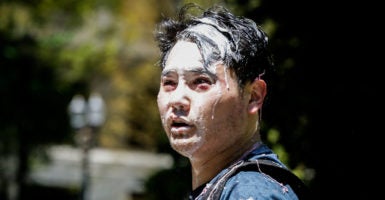 Most Americans can agree that journalists should be safe to report on a protest without being targeted, or worse, physically attacked. It’s part of their job. But over the weekend, we learned that for a conservative, Asian, LGBT journalist, those rules don’t necessarily apply.

Quillette editor and photojournalist Andy Ngo, who is known for his work in covering Antifa, set out on Saturday to cover a rally held by the far-right group Proud Boys, and a counterprotest organized by the far-left group, Antifa.

Late in the afternoon, Ngo tweeted that members of Antifa violently attacked him and stole his camera equipment.

Jim Ryan, a reporter with The Oregonian, tweeted out a video of Ngo being attacked by masked figures:

As reports of the attack went viral, conservatives began asking why the police appeared to do nothing as a journalist was robbed and beaten on video, in broad daylight.

According to Oregon Live, “Police were lined up along the perimeter of the park before the attack, but no one intervened to break up the fight.”

Sen. Ted Cruz, R-Texas, called for a federal investigation into the matter, accusing Portland Mayor Ted Wheeler, a Democrat, of ordering his police officers to let citizens be attacked by domestic terrorists “for political reasons.”

Wheeler’s office did not respond to The Daily Signal’s request for comment.

Hans von Spakovsky, a senior legal fellow at The Heritage Foundation, said that investigation is justified under federal law.

“The Civil Rights Division of the Justice Department needs to launch an immediate investigation of Antifa in Oregon,” he said, adding:

The dangerous violence and attacks that Antifa is organizing (and that its masked members are participating in) on journalists and anyone who disagrees with them must be stopped.  This despicable behavior is a violation of federal law, including 18 U.S.C. 241 and 42 U.S.C. 1985(3).

The latter is particularly applicable because that statute was passed to stop the Klu Klux Klan and bars using masks to disguise your identity when you are injuring victims to deprive them of their civil rights, which is exactly what Antifa is doing.

Ngo posted photos from the emergency room after the attack on Sunday where his face appeared bruised, and he claimed to be suffering from a brain hemorrhage.

According to Oregon Live, at least eight people, including three officers, were treated by medics. Three, including Ngo, had to seek medical care at local hospitals. Officers also faced eggs, milkshakes, and “a substance similar to quick-drying cement.”

On Monday afternoon, a statement from the Portland Police Association sharply criticized Wheeler, suggesting that officers were—in fact—being told to stand down in some regard.

“It’s time for our mayor to do two things,” the statement reads in part. “Tell both Antifa and Proud Boys that our city will not accept violence in our city and remove the handcuffs from our officers and let them stop the violence through strong and swift enforcement action. Enough is enough.”

The dueling protests died down after police declared a “civil disturbance and unlawful assembly.” Despite the violence faced by Ngo and others, police did not declare Saturday’s clash a riot.

Harmeet K. Dhillon, a California lawyer with a history of representing figures on the right, has been in contact with Ngo and tweeted:

And columnist Michelle Malkin set up a GoFundMe for Ngo, writing (emphasis in original): “I said during my CPAC speech earlier this year that we need to stand with those reporting and fighting on the front lines. Andy is one of the intrepid journalists doing the job no one else will do.” So far, the fund has raised over $150,000.

Good news! ?@MrAndyNgo? has been cleared to leave the hospital! He’ll have more to say in coming days about what happened to him & others yesterday in Portland. He is very thankful for the overwhelming support from decent people, especially ?@michellemalkin? & donors. pic.twitter.com/gK3ZEHfRyE

Thankfully, at least a few prominent members of the mainstream media, such as CNN’s Jake Tapper and Brian Stelter, condemned the attack. But there’s no doubt if a mainstream media reporter, instead of a journalist on the right, had been attacked like this, there’d be front-page coverage everywhere.

After the publication of this piece, Mayor Ted Wheeler’s office sent the following statement:

“I fully support the Portland Police Bureau. They have the unenviable task of keeping the peace in large demonstrations. My directive to them has always been clear: protect people’s rights, uphold public safety, and enforce the law. This idea that our police officers received a different directive from me is false.”