Democrat Lawmaker Speaks Out Against Nike 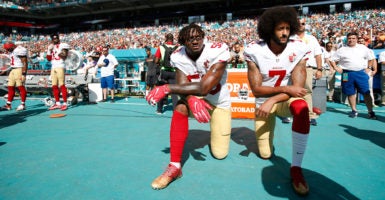 In this 2016 photo, Eli Harold and Colin Kaepernick of the San Francisco 49ers kneel on the sideline during the national anthem, prior to the game against the Miami Dolphins on Nov. 27, 2016, in Miami Gardens, Florida. (Photo: Michael Zagaris/San Francisco 49ers/Getty Images)

Democratic Illinois Rep. Dan Lipinski expressed his opposition to Nike’s decision to recall an American flag-themed sneaker by wearing one of the shoemaker’s largest competitors.

“I’m sitting here working. Notice I’m not wearing Nikes, nor will I anytime soon,” Lipinski tweeted Tuesday along with a picture of the New Balance sneakers he was wearing.

Nike revealed a day prior that the company was recalling Air Max 1 USA sneakers because a Revolutionary War-era version of the flag was stitched on the heel.

The already-produced shoe line was pulled after former NFL quarterback Colin Kaepernick complained that the Betsy Ross flag was a symbol of the slave era and considered offensive, reported The Wall Street Journal.

Kaepernick, who is endorsed by Nike, gained notoriety by kneeling during the national anthem to protest systematic racism in America.

Nike cancels its plans to make a sneaker with a “Betsy Ross” flag, and the criticism begins https://t.co/DeYMRPYl7u

A spokeswoman for Nike confirmed the sneakers were recalled due to the American flag.

“Nike has chosen not to release the Air Max 1 Quick Strike Fourth of July as it featured the old version of the American flag,” the spokeswoman told the Journal.

Lipinski is a member of the centrist Blue Dog Coalition and has one of the most conservative voting records in the Democratic Party. As one of the last remaining pro-life Democrats in Congress, he has been a target of the more progressive wing.

The decision to abort the patriotic shoe line garnered immediate and widespread backlash. Arizona Republican Gov. Doug Ducey announced Arizona will withdraw all of the financial incentives provided to Nike for a new manufacturing facility.

“Words cannot express my disappointment at this terrible decision. I am embarrassed for Nike,” Ducey said Tuesday. “Nike is an iconic American brand and American company. This country, our system of government and free enterprise have allowed them to prosper and flourish.”

“Nike has made its decision, and now we’re making ours. I’ve ordered the Arizona Commerce Authority to withdraw all financial incentive dollars under their discretion that the State was providing for the company to locate here,” he continued. “Arizona’s economy is doing just fine without Nike. We don’t need to suck up to companies that consciously denigrate our nation’s history.”