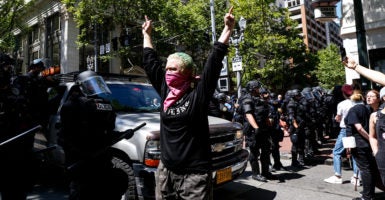 An unidentified Rose City Antifa member flicks off the police during a demonstration between the left and right at Pioneer Courthouse Square on June 29, 2019, in Portland, Oregon. (Photo: Moriah Ratner/Stringer/Getty Images)

Members of the violent left-wing movement Antifa have repeatedly harassed and attacked members of the media who cover them.

While some members of the national media have been sympathetic toward Antifa in the past, that hasn’t kept Antifa members from attacking the journalists actually covering them on the ground.

The U.S. Press Freedom Tracker, a collaboration led by the Freedom of the Press Foundation and the Committee to Protect Journalists, includes numerous instances of “anti-fascist” agitators harassing and assaulting journalists since President Donald Trump took office.

Protesters at an Antifa rally in Charlottesville, Virginia, harassed and attacked an NBC crew in August 2018. NBC reporter Cal Perry tweeted out a video of the attack.

The same day of Perry’s attack, Antifa members in the nation’s capital harassed reporters at another rally.

Antifa members in Berkeley, California, attacked a local news reporter in August 2017, according to the U.S. Press Freedom Tracker.

“What I saw was a photographer—a white guy, thirty-something, pink shorts, black tee-shirt; media affiliation, if any, still unknown—taking blows to the head and body while cradling his camera like a football recovered post-fumble. Evidently, he’d captured something the antifas didn’t want him to document. They wanted to destroy the evidence, and he wasn’t going to hand it over,” Kessler wrote in an essay for The New Republic.

The black-masked agitators later took Kessler’s camera and smashed it on the ground to keep him from documenting their actions.

That same month, August 2017, an Antifa member struck a Richmond photojournalist in the head with a blunt object, forcing the camera man to get stitches at the hospital.

Our @CBS6 photojournalist assaulted in the head while shooting protests in Richmond. In the hospital getting stitches. Stop the VIOLENCE! pic.twitter.com/xGEWu0SWr4

Charles posted the video to Twitter, adding: “I just got punched in the chest for recording a masked woman tagging a bus stop on Michigan Ave.”

Charles told the Freedom of the Press Foundation the masked woman was spray-painting “Die Fascist Scum” on a bus stop.

I just got punched in the chest for recording a masked woman tagging a bus stop on Michigan Ave pic.twitter.com/WQxFjR5740