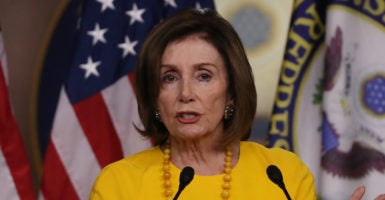 If you thought House Democrats would slow down after six months of LGBT-open borders-infanticide socialism, think again. Based on Tuesday’s hearing, the new majority is just warming up.

Apparently, it’s not enough to try to strip away people’s privacy, speech, liberty, and dignity. Now, the left is coming for the biggest prize of all: our freedom to believe.

Common ground used to be a lot more common on things like religious liberty. But, like born-alive protections, the transgender agenda, and taxpayer-funded abortion, those areas of bipartisanship have evaporated in a cloud of the left’s new radicalism.

Suddenly, areas that used to be political no-brainers are back under the microscope—including a law so popular that it passed by voice vote in the House and with just three objections in the Senate: the Religious Freedom Restoration Act.

“Since the beginning of the Trump administration,” Chairman Robert Scott, D-Va., insisted in his education and labor subcommittee, “this troublesome trend has only gotten worse.”

By “troublesome trend,” of course, he means the free exercise of religion, which Democrats are no longer interested in defending.

Under its new bill, called—ironically—the Do No Harm Act, the party of Speaker Nancy Pelosi tries to do away with this little nuisance called the First Amendment, gutting the Religious Freedom Restoration Act and leaving every man and woman of faith at the mercy of their government on matters like health care, adoption policy, housing, education, and small business.

“While religious liberty remains a fundamental value, it cannot and should not be used as a weapon to cause harm to others,” Scott went on.

That’s ironic, most Christians would tell you, since it’s their freedoms that have come under increasing attack.

And in those cases, as Alliance Defending Freedom’s Matt Sharp testified to the committee, the Religious Freedom Restoration Act has hardly been the shield for religion that liberals like Scott make it out to be.

Rep. Mike Johnson, R-La., a constitutional law attorney for more than 20 years, pointed out that in the 26 years since Religious Freedom Restoration Act was enacted, people who’ve looked to the statute for protection have only been successful about 17% the time.

“In other words,” he fired back, “the government almost always wins!”

“All RFRA provides is a fair hearing,” Johnson went on. And in today’s courts, not even that is a guarantee. “[It] was created to provide a very reasonable balancing test between sincerely-held religious beliefs and the government’s interest in federal law.”

If Congress takes that away, just imagine what would happen. Rep. Phil Roe, R-Tenn., a doctor (the only one at the hearing), knows all too well.

“[As an OB-GYN], will I be forced to perform something I believe to be wrong [like] an abortion?” he asked.

Others asked about contraception and foster care. Liberal members fired back that conservatives were using the law to keep patients from getting the care they need.

“RFRA is not about denying health care to women,” Rep. Virginia Foxx, R-N.C., fired back. “RFRA is about protecting the First Amendment and our right to the free exercise of religion.”

The real problem, she insists, isn’t faithful Americans—it’s Democrats who want to strong-arm Americans into surrendering their values.

I think the very reason we must make sure this bill never passes is that many of our colleagues would impose their beliefs on others if RFRA were changed. And that’s really troubling to me. Again, I want to say … disagreement is not discrimination!

Rep. Bradley Byrne, R-Ala., could only shake his head at the other side of the aisle.

There is a fundamental conflict in values in this country, and there is a determined minority—an intolerant minority—that would tell the majority in this country who are people of faith, ‘You cannot exercise your faith because we find it repugnant in some way.’

This bill in essence would make everybody’s right to freely exercise their religion a secondary right. Well, to millions—tens of millions—it is the primary source of their meaning in life, and the Democrats would take that away from them.

If this committee questions anything, he said, it should be why we’re taking away the rights of citizens to practice their faith—not what liberals can do to make the situation worse.