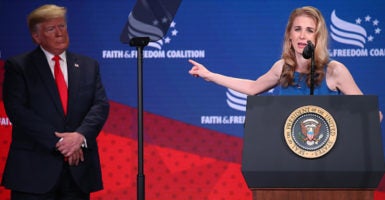 President Donald Trump on Wednesday promised to roll out soon a health care proposal that “blows away” Obamacare, while receiving credit for another health care measure he signed into law in 2017.

In his speech at the Faith & Freedom Coalition’s 2019 Road to Majority Policy Conference in Washington, Trump said, “We have a health plan that is far better than Obamacare.”

We’re keeping Obamacare alive; I felt I should do that. … If we win the House back, and keep the Senate, we are going to have a plan that blows away Obamacare.

It will be less expensive, and it will be far better health care and health insurance. And, we’ll be announcing it over the next month or so.

Trump invited a grateful survivor of bone cancer to the stage who gave the president credit for a 2017 health care law that she said saved her life.

Natalie Harp, a millennial entrepreneur from California, fired up the crowd nearly as much as the president when talking about the “Right to Try” law that Trump signed in 2017 that enables terminally ill patients to gain access to experimental drugs before the medicines are approved by the Food and Drug Administration.

“We all know the story about the Good Samaritan, but what you don’t know is, I was that forgotten person on the side of the road, the victim of medical error, the No. 3 cause of death under the previous administration, and I was left to die of cancer,” she said.

“First, the medical establishment, they came by and saw me there, and they wrote prescriptions for opioids, and they walked on,” said Harp, standing next to Trump.

Next, the political establishment, they saw me there, and they stopped just long enough to come over and tell me how to die, how to speed up my death, and die with dignity.

But then, an outsider gave up his own quality of life so that we could live and work and fight with dignity, because he believes in survival of the fighters, not the fittest.

Mr. President, I have to say, you have made a lot of promises to us, and you have kept every one of them. So now, we are going to make you this promise: Just as you fought for us, forgotten Americans will never, ever forget how you saw us on the side of the road, and you walked over, and you picked us up, and you made us great again.

We are going to fight for you, Mr. President. God bless you!

Trump tweeted about Harp earlier this month after seeing her tell her story on the Fox News Channel’s “Fox & Friends” program.

Trump spoke of seeing Harp when she was not able to stand and speak with authority, as she did before the large audience Wednesday at the Washington Marriott Wardman Park Hotel.

“She was in a wheelchair, she was in a bed, and they were actually preparing her for death,” Trump said. “Because of Right to Try, they had a medicine that wouldn’t have been approved for years. Now, it’s looking a lot better. I don’t know what it was, but that sucker worked for Natalie.”

In his remarks to the conference, Trump also discussed a number of other issues, including his pushing for better trade deals ahead of his trip to Asia, noting that he’s about to nominate his 145th federal judge, and highlighting that his administration has protected religious liberty for Americans.

In criticizing late-term abortion, Trump brought up controversial comments made earlier this year by Virginia Gov. Ralph Northam, a Democrat, who the president said appeared to indicate support for infanticide after a baby is born.

Every child, born and unborn, is made in the holy image of God, and that is why I’ve asked Congress to ban the late-term abortion of babies. And they’ll do that.

Northam later blamed the media for mischaracterizing the comment, but said he did not regret making it.