With Crony Tax Bill, Democrats Are Doing Their Level Best to Revive the Swamp 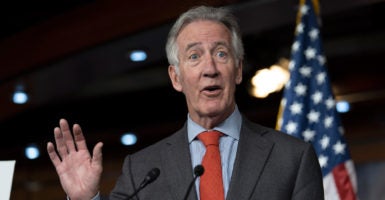 Congressional Democrats are taking the lead to renew a list of long-dead tax subsidies at the behest of powerful corporate lobbyists.

Their plan is to attach the long-sought-after corporate tax subsidies—called “tax extenders”—to a bill that expands welfare spending. How to pay for it? They plan to cover about a quarter of it by raising the estate tax. The rest would be added to the already-massive federal deficit.

The House Ways and Means Committee will consider the package of bills on Thursday.

There are 14 tax credits and other privileges under consideration that subsidize certain types of energy production and use. Biofuels, plug-in electric vehicles, coal facilities, and energy efficient homes all have their own carve-outs.

There are other subsidies as well—for instance, for an American Samoan tuna plant; a renewed program for low-income areas that government research has repeatedly found to be ineffective; an increased tax on coal; and a paid family leave subsidy that acts as a windfall tax benefit, as it is almost exclusively used by businesses that are already providing leave in the free market.

The House committee plans to pair its corporate subsidy bill with a bill that would temporarily expand payments to taxpayers with children and to low-income workers.

An expanded credit for child and dependent care expenses is proposed, and the beginning of the phase-down (from the new 50% credit to the existing 20% credit) would be increased to $120,000 a year—up from its current $15,000 threshold. Employers could also get an increased subsidy for child care services.

These bills would also expand the largest spending program for low-income households—the earned income tax credit—by about $105 billion over 10 years if the two-year expansion is made permanent. In that case, the new subsidies for parents with children and other dependents could cost more than $340 billion over 10 years.

This is the wrong path. Government currently spends over $1.1 trillion a year on over 90 government means-tested programs. Spending on cash, food, and housing aid to families with children is three times the amount needed to nearly eliminate all child poverty in the U.S.

Instead, Congress should start by spending existing money more efficiently and compassionately, rather than simply dumping more money into a flawed system.

For example, the current earned income tax credit offers some disincentives to work, penalizes marriage, and nearly a quarter of it goes toward erroneous and fraudulent payments.

Reforming this program would mean making it more effective at serving the poor, rather than simply expanding it, as the Democrats propose.

As mentioned, the proposal would cover roughly one-quarter of its official cost by raising the number of estates that are taxable at death by cutting the tax exclusion in half, from roughly $12 million to $6 million in 2023. This would accelerate the expiration of the temporary relief from the estate tax that was included in the 2017 tax cuts.

The estate tax is an unnecessary burden on family-owned businesses that slows economic growth and investment, and contributes to large compliance burdens, which the wealthiest families are often able to plan around anyway. This tax should be fully repealed, not expanded.

Compounding all these various problems, the bill violates a long-standing bipartisan principle of sound governance: Most of its proposals are temporary.

This would set up a renewed cycle of periodic “must pass” extensions beginning in two years, which only breed further corruption and fiscal mismanagement.

Even if tax credits worked as they are intended, periodic temporary extensions are a very poor way to construct tax policy, budget policy, and economic policy.

Temporary reauthorizations mask the true cost of what are effectively permanent policy features. And since they are recurring, they give an opening for politicians to request patronage from special interests on a semiannual basis, thus creating economic uncertainty.

If the current Ways and Means proposal were extended permanently, the cost over the next 10 years would more than quadruple, from roughly $150 billion to more than $620 billion. In that case, the increased estate tax would cover a measly 6% of the true cost.

Furthermore, many of the credits up for consideration actually expired in 2017, so extending them retroactively would do nothing to affect business decisions—those have already been made. All it would do is transfer taxpayer funds into the hands of corporate lobbyists who stand to gain from the credits.

The extenders are little more than a giant gift from taxpayers to corporations—a misuse of taxpayer money. Reviving these currently-dead tax extenders would hand a win to the swamp.

Rather than throwing good taxpayer dollars after bad, Congress should focus on reforming welfare spending programs so that they help, not hurt, the poor. This should be done separate from any consideration of corporate tax subsidies.

Note: This article has been corrected to reflect that the proposed bill covers roughly 25% of its costs through estate tax increases. In addition, if made permanent, the cost of the tax extenders would quadruple over the next 10 years.