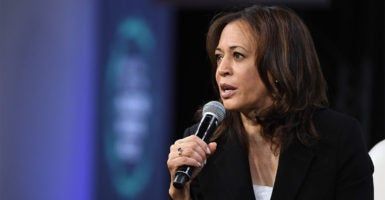 Democratic presidential candidate Sen. Kamala Harris, D-Calif, speaks at the National Forum on Wages and Working People: Creating an Economy That Works for All at Enclave on April 27 in Las Vegas, Nevada. (Photo: Ethan Miller/Getty Images) 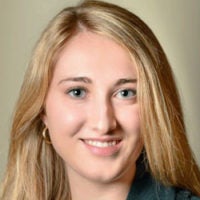 Sen. Kamala Harris’ recent “equal pay certification” proposal self-identifies as the “be-all, end-all” for what the left claims is a gender wage gap.

But according to conclusive studies and economic research, the California Democrat’s idea is actually a direct path down a nasty road of privacy violations and limited opportunities in the workforce for women.

Often referencing the left’s favorite Nordic superstar, Harris is hoping to mirror Iceland’s attempts at “fair pay,” in which businesses with 25 or more employees are required to obtain a special “pay equality certification” from the government every three years.

The goal is to drastically minimize the wage gap between men and women and to impose unionlike pay structures within the private sector, ultimately distorting labor markets and imposing inflexible job requirements and work schedules that disproportionately hurt women.

“Women tend to be ‘flexibility maximizers’ in their careers,” said Patrice Onwuka of the Independent Women’s Forum at a Conservative Women’s Network event May 21 co-hosted by the Center for Conservative Women and The Heritage Foundation. “And this flexibility tends to get eroded when you have these one-size-fits-all policies.”

Onwuka was joined on the panel discussion about the wage gap between men and women and about Harris’ proposal by three leading fiscal and economic experts, Romina Boccia and Rachel Greszler of The Heritage Foundation and Vanessa Brown Calder of the U.S. Congress Joint Economic Committee.

“Kamala Harris’ proposal ignores the differences between the choices men and women make affecting their career and places each individual employee on exactly equal playing fields, regardless of any distinguishing features or actual performance, or what individuals decide to negotiate for themselves,” Greszler explained.

In fact, a Harvard study looked at data from the Massachusetts Bay Transportation Authority, a unionized employer with rigid pay scales and no room for discrimination. It found that female employees still earned less than their male counterparts.

The study found that given the same opportunity, men “worked about 83 percent more overtime” and were “twice as likely to accept an overtime shift on short notice.” Therefore, even in these highly unionized environments, we still see considerable wage gaps, attributed to different workplace choices between the sexes.

“It’s really a ‘choice gap,’ if you start analyzing why there is a difference in average amounts that men and women make—and about half of that gap is simply due to the hours,” Greszler added.

The panelists each discussed the multitude of ways women differ from men in the workplace that ultimately affect pay, particularly focusing on women’s preference for more flexible work schedules, gravitation toward service- and care-oriented degrees and careers, and the inclination toward physically low-risk jobs.

“With this proposal that Senator Harris released, the focus is really on discrimination in the workplace, and that’s just not supported by what we see in the social science literature, and so it feels very disingenuous,” said Brown Calder.

In 2018, the Bureau of Labor Statistics released a report suggesting the gender wage gap to be better described as a gender earnings gap because of the difference in earnings between men and women explained by age, hours worked, and marital status—not by gender discrimination.

“There is absolutely no evidence that supports that claim,” Onwuka explained, referring to the left’s main talking point. “The Bureau of Labor Statistics found that when they actually calculate the gender pay gap over the year [2017], and after they layer on controlling factors, they find that the gap shrinks considerably, and even then, they are not willing to chalk that up to gender discrimination.”

Yet, despite the clear lack of discrimination resulting in the wage gap between men and women, Harris’ proposal is still picking up support on the left, most likely because it identifies a potential war against big corporations and positions itself as a game plan for women’s rights.

In reality, it is a nightmare.

The proposal is better described as a “pay transparency bill” that grants the government access to employer and employee information to detect whether a wage gap between men and women exists, and if it’s a consequence of sex discrimination.

Employers would also be required to provide data about hiring processes, including information about the race and sex composition of their workforce. If the business fails to comply, 1% of its profits would be fined for every 1% of wage gap found.

Harris’ proposal is dependent on corporations reporting their numbers and employee information. Such legislation is “lawsuit happy,” because it invades private employers’ right to privacy, as well as that of the employees, and forces corporations to comply “or else.”

Were it to become law, it would immediately be challenged in court.

And because we already know that sex discrimination is not a contributing factor to the earnings difference between men and women, it would fail to be proven in lawsuits.

Denmark, another Nordic icon of the left, actually implemented a similar law, called the 2006 Act on Gender-Specific Pay Statistics, that requires firms with more than 35 employees to report pay gaps. The study found that although there was a slight reduction in the pay gap, it came at the cost of a 2.8% decline in total pay, and productivity went down also.

“In the end, everybody was worse off,” said Greszler. “The issue at play is, ‘Who is better poised to determine what to pay their employees—the employer or the government?’”

And ultimately, who is better suited to decide whether a business has a legitimate pay gap or not?

In 2017, the U.S. Department of Labor claimed that Google systematically underpays its female employees, stating that it “received compelling evidence of very significant discrimination against women in the most common positions at Google headquarters.

Google, a social justice warrior that has devoted $150 million to address diversity and gender pay issues, denied those allegations after analyzing the same data. Google’s analysis revealed it was actually overpaying women—the complete opposite from what the Labor Department found.

Efforts like the Paycheck Fairness Act, which was passed by House Democrats on March 27, coupled with Harris’ proposal, would also backfire most on women and minorities.

Think about it. Who would be discriminated against by all the lawsuit-motivated solutions packed inside these bills?

“If you’re an employer, would you hire someone who will be automatically enrolled in any class-action lawsuit and will be driven toward lawyers mining the data, trying to pull employees aside and say, ‘Hey, I think you’re being discriminated against, so join us on this lawsuit that’s going to give you a ton of money,’ or are you going to hire employees uninvolved?” Greszler mused.

The real solutions to minimizing the gender earnings gap—not the gender wage gap—vary, but remain largely focused on increasing the flexibility of the workforce for women. Finding solutions that make it possible for new mothers to re-enter the workforce, and—when it’s possible for an employer to do so—to balance work and life, allow for greater workforce participation among women.

“If we close what is really a ‘choice gap’ by taking choices away from women, resulting in really rigid pay structures and one-size-fits-all jobs, you close the door on a lot of women even being able to work,” Greszler said.

Eliminating the opportunity and power to negotiate for the raises and benefits women desire to balance work and family will only reduce women’s workforce participation.

As such, proposals like Harris’ will only disempower and disenfranchise women.