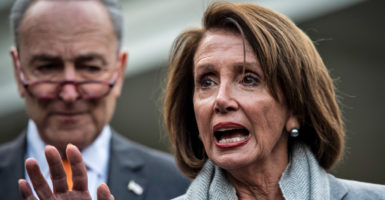 Back in October, House Democratic leader Nancy Pelosi told an audience at Harvard University that if the Democrats retook the House, one of her top legislative priorities would be to pass the misnamed Equality Act, a bill that would impose radical sexual ideology on the nation.

Democrats took the House, and Pelosi wasn’t bluffing. She’s now pushing a bill that would undo some of the most significant achievements of the Trump administration. Here’s how.

Here are the major Trump victories that the Equality Act would undo.

1. The Equality Act would force employers to cover abortion, and medical professionals to perform or assist in performing abortions.

When the Obama administration tried to force this same policy in its very last months in office, a federal judge declared it unlawful. When the Trump administration came into office, the Trump Justice Department agreed with that judge and did not appeal his ruling, which placed a 50-state injunction on that regulation.

Should the Equality Act become law, this abortion policy would become the law of the land, undermining President Donald Trump’s significant pro-life record.

2. The Equality Act would force employers to pay for sex “reassignment” procedures in their health insurance plans, and require medical professionals to perform them.

Thankfully, when the Obama administration attempted to impose this mandate, a federal judge struck it down, and the Trump administration agreed with the judge and did not appeal the ruling. Should the Equality Act become law, it would undo Trump’s policy of protecting the freedom of medical doctors to not perform “reassignment” procedures if they deem them bad medicine.

The Obama administration imposed this transgender mandate on schools in all 50 states, and thankfully the Trump administration reversed the misguided policy during its first weeks of office. But, should the Equality Act become law, it would override the Trump policy and would threaten the privacy, safety, and equality of women and girls across the country.

The Trump administration has implemented a careful, nuanced policy that allows people who identify as transgender to serve in the military—provided they no longer suffer from gender dysphoria and serve in accordance with their biological sex. But should the Equality Act become law, this Trump policy could be deemed “discrimination.”

5. The Equality Act would force faith-based adoption agencies to either violate their conviction that every child deserves both a mother and a father or to stop serving children in need altogether.

Thankfully, the Trump administration has taken initial steps to protect adoption agencies from these misguided policies. Additional steps are needed. But if the Equality Act became law, it would force all adoption agencies in all 50 states to either violate their convictions or close their doors.

6. The Equality Act would force a variety of small business owners to violate their beliefs about marriage, sexuality, and gender.

At the state level, this has happened to bakers, florists, photographers, and even funeral home owners.

7. The Equality Act, in general, threatens the freedom of speech, freedom of association, and free exercise of religion rights of countless people.

Anyone who believes we are created male and female, and that male and female are created for each other, will be at risk. This means Orthodox Jews, Roman Catholics, Evangelical Christians, Latter-day Saints, Muslims, and people of no particular faith tradition but who take science seriously will be on the wrong side of federal civil rights law.

Thankfully, the Trump administration has championed freedom of speech, free exercise of religion, and the rights of conscience. All of this would be at risk should the Equality Act become law.