Trump Administration Has Sided With a Faith-Based Adoption Provider. Here’s Why That Matters. 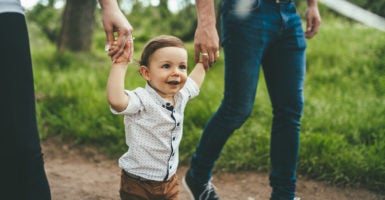 Miracle Hill Ministries was being forced to choose between its faith and serving children. (Photo: PhotoAttractive/Getty Images)

The Department of Health and Human Services announced Wednesday that it will grant a waiver to Miracle Hill Ministries, a Christian organization whose programs include adoption services and foster care support.

The waiver will allow Miracle Hill to continue to serve families according to its own convictions without the threat of being shut down. This is good news for the children of South Carolina and the nation at large.

Miracle Hill Ministries is a Christian charity based in South Carolina that offers a variety of services, including foster care support.

When a Jewish couple discovered that Miracle Hill partners only with prospective foster parents who share its Christian convictions, they alleged religious discrimination.

Certain Obama-era regulations made it impermissible for religious agencies to choose only prospective foster parents who share the same religious beliefs. Under pressure from those regulations, the state investigated Miracle Hill and ultimately threatened not to renew its license.

Then, Gov. Henry McMaster reached out to the Department of Health and Human Services to seek a waiver for Miracle Hill—citing the Religious Freedom Restoration Act—so it could continue to operate.

Despite significant pushback from lawmakers operating on a misunderstanding of Miracle Hill’s motives, the meaning of the Religious Freedom Restoration Act, and the very nature of religious freedom, Miracle Hill received a waiver Wednesday morning from Health and Human Services.

This waiver is perfectly consistent with the law. The Religious Freedom Restoration Act prohibits federal action that places an undue burden on religious exercise. That’s exactly what the Obama-era regulations did in Miracle Hill’s case.

But the meaning of this waiver goes beyond Miracle Hill. It sends a clear message that similar organizations need not sacrifice their beliefs in order to serve their community.

Other faith-based adoption and foster care providers across the country are currently being forced to choose between their faith and serving children. (See here, here, here, and here.)

Unfortunately, this is not a new trend.

In the past several years, adoption providers in several states were forced to close due to their religious beliefs, including that marriage is between one man and one woman because the sexes are complementary and because children deserve a mother and a father.

Just like in the Miracle Hill case, critics of faith-based agencies are operating on a mistaken understanding of religious freedom and discrimination.

A difference of opinion about the meaning of marriage does not amount to discrimination. It is disagreement among two sides that represent large swaths of this country. It’s the kind of disagreement that should be tolerated in a pluralistic society.

But that did not stop South Carolina’s Department of Social Services from nearly forcing one of its most effective providers out of the system. In fact, Miracle Hill recruits 15 percent of the state’s foster families.

Boxing out these providers did not help a single child find a home. In fact, in Illinois, over 2,000 children were displaced when the state stopped working with faith-based providers that held traditional views.

When adults politicize adoption and foster care like this, children are the ones who suffer.

There is no question that the opioid crisis is sending more kids into the foster care system and worsening the pre-existing shortage of foster parents. Last year alone, foster care rates rose in 39 states. Nationwide there are 428,000 children waiting for placement in a foster home.

Now is not the time to drive willing and able providers out of the system. Increasing public-private partnerships to recruit more foster parents from more communities is in the best interests of children.

Moreover, states that capitalize on faith-based organizations and networks reap the benefits in recruitment, wrap-around services, and retention.

The administration’s decision to grant a waiver to Miracle Hill could not have come soon enough. But there is still work to be done.

Consider the Obama-era regulations that created the Miracle Hill controversy in the first place. These regulations—45 C.F.R. s. 75.300 (c) and (d)—added sexual orientation and gender identity as well as religion to the nondiscrimination provision in Title IV-E of the Social Security Act.

These regulations have now been weaponized against Miracle Hill and other faith-based providers to attack them for their constitutionally protected religious beliefs.

As Texas Attorney General Ken Paxton pointed out, these regulations go beyond the government’s statutory authority. The Social Security Act only includes race, color, and national origin as protected classes. The Obama administration had no right to add additional categories.

While the administration should continue to grant exemptions like it did for Miracle Hill, this is not enough. It ought to rescind these bad regulations and instead implement regulations that proactively protect faith-based providers in order to maximize the agencies available to serve kids.

Until then, the fight over adoption and foster care rages on.