Social Media Companies Need to Stand Up Against Left 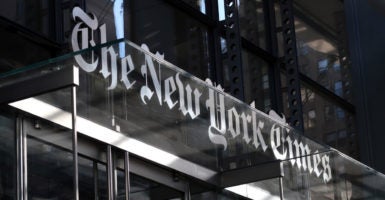 "Many in the media want a regeneration of the monopolistic media control of the past," Ben Shapiro writes. (Photo: Gary Hershorn/Getty Images)

This week, The New York Times ran a massive piece detailing the supposed radicalization of one Caleb Cain.

The suggestion by the Times was simple: If you watch typical conservative content hosted by people like me, you will eventually end up watching material hosted by alt-right figures.

The only solution, presumably, would be for YouTube to downgrade material the Times dislikes.

This attitude isn’t only springing from the Times. Axios chief technology correspondent Ina Fried grilled Google CEO Sundar Pichai over the weekend, essentially demanding that YouTube do something to marginalize videos Fried dislikes.

Vox ran a full-scale propaganda campaign last week to get conservative comedian Steven Crowder kicked off YouTube for the great sin of making offensive jokes about one of Vox’s columnists.

Pseudojournalists from organizations like Vox and Huffington Post spend their days calling advertisers for comment on various controversial statements by right-wing hosts from Tucker Carlson to Laura Ingraham to Sean Hannity.

Their goal isn’t to follow the news but to generate a wave of advertiser-pullout announcements likely to do damage to those conservative hosts.

Such censoriousness is rarely, if ever, practiced on the political right. YouTube and Facebook and Twitter are never targeted by conservatives over their unwillingness to shut down opposing points of view; they’re criticized for their willingness to kowtow to the political left and its demands for speech suppression.

Advertisers on left-wing programming can speak freely, secure in the knowledge that conservatives won’t be calling them up to rip them for sponsoring shows like Rachel Maddow’s.

That’s good. That’s how it should be. But for members of the political left, it isn’t.

There are two reasons for that. The first is obvious: Those on the political left long ago abandoned the traditional liberal notion that those who disagree have a right to speak.

Instead, they must be deplatformed and their advertisers punished, lest their nefarious ideas spread and metastasize. “Repressive tolerance,” in the parlance of Herbert Marcuse, has become a mainstay of left-wing thinking.

The other reason is far more cynical: Many in the media want a regeneration of the monopolistic media control of the past. They long for the days when everyone consumed mainstream product to the exclusion of alternative sources.

It’s no coincidence that YouTube and Facebook have been touting their elevation of “authoritative” news in recent years—they’re looking to appease a ravenous media eager to tear them down.

The media and Democrats have picked the right target: The lords of Big Tech are eager to please and frightened of blowback. They’re political liberals who can be intimidated into censorship while being simultaneously assured that they’re making the world a better place.

But backbone is in short supply. And the glut of intimidation won’t relax anytime soon.