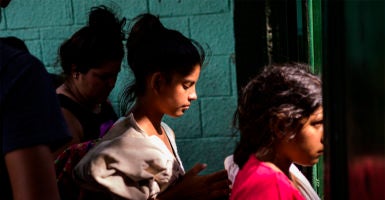 “It’s been over 18 months since the administration asked for the legislative fixes that would’ve prevented the current crisis, and 40 days since we asked for the emergency funding necessary to manage it,” McAleenan told members of the Senate Judiciary Committee during his opening remarks.

The Department of Homeland Security chief then broke down how the border crisis has only escalated since those requests were made.

“In the last 40 days, 60,000 children have entered into DHS custody—both unaccompanied and as part of family units. Last month, as you noted, Mr. Chairman, we encountered a modern record 144,000 border crossers, a record day of over 5,800 border crossings in a single 24-hour period, and the largest single group [ever] apprehended at our border—1,036 individuals,” McAleenan said.

The acting secretary’s requests Tuesday were nearly identical to what he asked of lawmakers when he testified before a House committee in May: Extend the Flores Settlement Agreement and change the country’s asylum laws.

The Flores Settlement Agreement is a federal court order that restricts the U.S. government from detaining children and family units for longer than 20 days. Because this 20-day period is not long enough for overwhelmed immigration officials to process them, most migrant families are able to be released into the U.S. interior.

McAleenan argued the settlement—along with “holes” in the country’s asylum laws—has become a major pull factor in attracting Central American migrants into he U.S.

Unlike years prior when most illegal migrants were single adult males from Mexico, many of the migrants reaching the U.S. border today are family units from Central America’s Northern Triangle region.

“A gentleman in Guatemala two weeks ago that I met talked about his daughter leaving with her child this year, and he said, ‘Everybody  knows that a child is a passport for migration to the United States,’” McAleenan told the committee.

“I want to make clear that this crisis is unlike anything we’ve seen at our border, and it, in large part, is due to the gaps in our immigration laws that are driving it, causing a dramatic demographic shift in the flow of illegal immigration into the United States that is placing children at unique and critical risks,” he explained.

The homeland security secretary pointed out 72% of all border enforcement actions in May were related to unaccompanied children and family units.

These children and families, most of them from Central America, cannot be quickly deported back to their home countries, creating a bottleneck of cases for immigration officials.

At the close of his opening remarks, McAleenan gave an explicit endorsement to legislation introduced by Republican South Carolina Sen. Lindsey Graham, who also serves as chairman of the Judiciary Committee.

Under Graham’s bill, those in Immigration and Customs Enforcement custody could be held for as long as 100 days, asylum laws would be changed to reflect the new demographic of people entering the U.S.—allowing unaccompanied children to be more quickly deported—and require asylum-seekers to file their claims within their home countries.