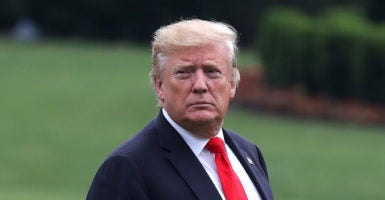 President Donald Trump has issued a memorandum authorizing the attorney general to “declassify, downgrade, or direct the declassification or downgrading” of any information relevant to “intelligence activities” connected to the “2016 Presidential election.” (Photo: Mark Wilson/Getty Images)

Acting in the interests of transparency and justice, President Donald Trump took exactly the right action Thursday night when he gave Attorney General William Barr new authority to disclose information dealing with what Barr has called “spying” on the Trump election campaign in 2016.

The president issued a memorandum authorizing Barr to “declassify, downgrade, or direct the declassification or downgrading” of any information relevant to “intelligence activities” connected to the “2016 Presidential election.”

Trump’s action is long overdue and should be welcomed by everyone who advocates more government disclosure about its activities—including journalists, who are always seeking such information.

Unfortunately, many Democrats and journalists immediately attacked the president for his new action favoring disclosure—in the same week they embraced the claim by House Speaker Nancy Pelosi that Trump is engaged in a “cover-up” to hide information from the public.

Trump’s new memorandum eliminates the “it’s classified” excuse that has been used to obscure how the counterintelligence operation against the Trump campaign originated.

Federal law enforcement officials launched the intelligence-gathering effort against the Trump campaign during Democratic President Barack Obama’s time in office—raising legitimate questions about whether the action against Republican Trump was politically motivated.

Obama was a strong supporter of his former secretary of state, Hillary Clinton, in her campaign when she ran against Trump in the 2016 presidential election.

The counterintelligence operation that Barr will investigate included court-sanctioned electronic eavesdropping—what Barr called “spying”—on the presidential campaign of the candidate from the opposing political party of the sitting president.

Such intelligence gathering against the campaign of a political opponent running for president is unprecedented in American history and cries out for further investigation.

According to special counsel Robert Mueller, his nearly two-year exhaustive investigation found no evidence of collusion between the Trump campaign and Russia to help Trump win the presidential election.

The false collusion claim was based on political opposition research by former British spy Christopher Steele that was paid for by the Clinton campaign—research that relied on hearsay and anonymous sources.

Even former FBI Director James Comey admitted that this “salacious” opposition research—the so-called Steele dossier – was never verified before the FBI used it.

According to Andrew McCabe, the former No. 2 official at the FBI, the FBI would not have applied for a Foreign Intelligence Surveillance Act warrant and opened the counterintelligence operation against the Trump campaign if it had never received the Steele dossier.

The memorandum Trump issued Thursday directs the heads of the Department of Homeland Security, the CIA, and any other agencies that include “an element of the intelligence community” to “promptly provide such assistance and information as the Attorney General may request.”

The president’s memo is written in a way designed to prevent any members of the intelligence community who may want to cover up what happened—or who don’t like Trump—from interfering with the declassification effort.

The memo directs Barr to consult “to the extent he deems it practicable” with the heads of the “originating intelligence community element or department”—meaning whichever agency is the source of a particular classified document.

But Section 2 of the Trump memo gives Barr authority to make the final decision about whether any information connected to the 2016 election probe will be declassified.

As a result, no one in “the swamp”—as many refer to the bureaucracy inside the federal government—will be able to block the disclosure of relevant information such as documents, communications, and court filings.

The president’s action is enormously important.

We obviously don’t want foreign governments interfering in our elections. But we also don’t want the political party controlling the executive branch to use federal law enforcement and intelligence agencies against candidates of the opposing political party or for other partisan political purposes.

The politicization of law enforcement happens routinely in dictatorships around the world—when critics of the regime in power are hit with false charges, convicted in show trials, and then sent to prison or sometimes even executed.

This should not happen in the United States. North Korea, Cuba, China, and Russia should not be our role models for dealing with political opponents.

Imagine the Democratic and media outcry if we learned that the FBI and other federal law enforcement agencies had recently obtained surveillance warrants against any of the 23 Democrats seeking to run against Trump in 2020 and were now investigating them.

It is vital that Barr investigate the origins of the counterintelligence operation and law enforcement investigation that was mounted against Trump and his campaign.

Barr must determine if there was real, verified, credible evidence that justified opening the investigation. The FBI also must explain why—if it actually had such evidence—it didn’t immediately brief candidate Trump that the Russian government was targeting his campaign.

In a statement released by the White House, press secretary Sarah Huckabee Sanders said the memo issued by Trump “will help ensure that all Americans learn the truth about the events that occurred, and the actions that were taken, during the last Presidential election and will restore confidence in our public institutions.”

Sanders is absolutely right. The only way for the American public to know whether federal law enforcement and intelligence officials acted in a completely ethical, professional manner or for partisan purposes is with complete disclosure and full transparency.

This is why it was so bizarre when Rep. Adam Schiff, D-Calif., accused Trump and the attorney general in a tweet of conspiring to “weaponize law enforcement and classified information against their political enemies. The cover-up has entered a new and dangerous phase.”

Cover-up? Does Schiff understand the meaning of the term?

Schiff’s cover-up charge makes no sense. The Trump memo calls for uncovering more information—not covering anything up. A presidential order to declassify and make public all information connected to a particular investigation is the exact opposite of a cover-up.

And it’s ironic that some of the same Democrats demanding the release of the full unredacted Mueller report—including legally protected information presented to grand juries and classified national security information—are now attacking the president for wanting to release more information about the origins of the Mueller problem.

If anyone can be accused of a cover-up it is Schiff and other critics of the president’s memo that calls for more public disclosure. Opposing the president’s call to uncover more information is by definition a cover-up.

And what are we to make of the claim that the new Trump memo will “weaponize” the formerly classified information against Trump’s “political enemies?”

It’s hard to understand that claim by Schiff as anything other than a fear that the disclosure will show that the president’s political enemies convinced the FBI and Justice Department to use hearsay, false claims, innuendo, and political opposition research to launch an unjustified counterintelligence and law enforcement operation and investigation against the Trump campaign.

It’s time we found out exactly what really happened.

As the late Supreme Court Justice Louis Brandeis once said, “Sunlight is the best disinfectant.”