The Real Inclusive Approach to Immigrants 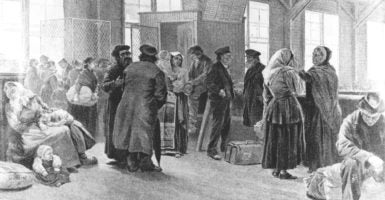 The survival of political liberty and a political community depends on a shared culture and the habits of character that protect it. Pictured: Engraving of immigrants arriving at Ellis Island, New York, 1895. (Photo: Ullstein Bild/Getty Images)

Is President Donald Trump’s call for patriotic assimilation, which is a part of his immigration package, a step toward totalitarianism and fascism? These are the hyperbolic claims made in a contentious op-ed by Fabiola Santiago, a columnist at the Miami Herald.

Santiago highlighted my own work in this field, citing a 2016 paper. While ordinarily I don’t react to criticism, especially when over the top, in this case a response makes it possible to elucidate some points.

As it is often the case with those whose proposals actually lead to a reduction in our freedoms, Santiago wraps her argument as a rousing defense of liberty: Assimilation would mean “the end of the romantic notion that we are a free people who can speak as we like, feel as we feel, be who we are, without fear of government reprisals,” she writes.

Let me make three points about this.

First, the survival of political liberty and a political community depends on a shared culture and the habits of character that protect it.

Second, the leading thinkers of the multiculturalism Santiago defends no longer even pretend to be on the side of political liberty.

And third, the comparison she draws between America and totalitarian Cuba gets things exactly backward.

Let’s start with the survival of political liberty. Some cultural traits and habits are necessary to self-rule, and others undermine it. A government charged with protecting our freedoms must promote the former and discourage the latter.

A statist, bureaucratic mindset that does not prize the right to private property, the right to freedom of speech and conscience, or the belief that all humans are born free and equal, would on the other hand render our society less free. Immigrants who come freighted with these habits of mind must be invited to forget them and take up new ones.

And indeed, immigrants from countries with these cultural habits always have faced pressure, from the American government and civil society alike, to leave them behind and adopt new ones.

A prime example is the wave of German immigrants who came to America in the 1800s, economically due to the dislocation of industrialization and politically because of the failure of revolutions in 1848. Culturally, many had statist proclivities that were unknown among most Americans.

In 1854, their political leaders in Kentucky adopted a “Platform of the Free Germans of Louisville” that had radical anti-property notions.

One of these notions read that “to occupy nature, the soil, as exclusive property, this no individual has the right to do.” Another said that “labor has an incontestable claim to the value of its product” and if “the capitalist” did not agree, then the government “has to interfere” to secure this right. A third called for the government to pay for instruction in German to the children of immigrants.

That same year, German immigrants in Richmond, Virginia, passed a similar platform calling for these same rollbacks of freedom and adding funds for a German-language university. The Virginia platform also called for a government takeover of the railroads, taxation of church lands, and abolishment of religious schools.

The Americans of the day decided pretty quickly to protect their way of life and compel the new German immigrants to adopt the American worldview, not import their own, thank you very much. The immigrant was not obliged to give up his beer and wiener, which were adopted into the national cuisine. We should all be thankful for all aspects of that arrangement today.

The process worked. By the 1880s, the German-born Wisconsin Congressman Richard Guenther was rallying crowds with these words: “After passing through the crucible of naturalization we are no longer Germans; we are Americans. … America first, last, and all the time. America against Germany; America against the world; America right or wrong; always America.”

The multiculturalism that Santiago defends is at odds with the liberty she purports to advocate, which brings us to our second point.

Santiago—who seems never to be have considered the allure of understatement—maintains that patriotic assimilation “and all the nationalist jargon that comes with it—is the concoction of right-wing think tanks that detest multiculturalism.”

“What Trump proposes,” she writes, “has the markings of the type of domination we fought against in World War II: Fascism.”

A fondness for multiculturalism seems nearly always to go hand in hand with an attachment to cosmopolitanism, or the belief that we are all citizens of the world, with loyalty first to all human beings rather than our own nation. They are both the opposite of assimilation.

Thus, contra Guenther’s hardy call for “America against the world,” Santiago seems oddly vexed that Trump’s call for merit-based immigration would “gut countries of their best minds”—as if they were compelled to come to America. (Doesn’t she care about their self-determination?)

But cosmopolitan aspirations, writes my Heritage Foundation colleague Arthur Milikh, “lack the power to constrain and tutor strong natural proclivities toward anger, pride, and selfishness” and it is the restraint of passions such as these that produce civility and the ability to govern oneself.

So it’s no surprise that the purveyors of multiculturalism no longer hide their disdain for natural rights. Progressive academics from Catharine A. MacKinnon to Louis Michael Seidman, Frederick Schauer, and Kathleen M. Sullivan all have come out against free speech because, in the words of MacKinnon, the First Amendment “has become a sword for authoritarians, racists and misogynists.”

As the most famous textbook on multiculturalism, “Critical Race Theory, an Introduction” by Richard Delgado and Jean Stefancic, puts it, critical race theorists “are suspicious of another liberal mainstay, namely rights” because they “believe that moral and legal rights are apt to do the right holder much less good than we like to think.”

These beliefs already have been put into practice, with foreseeable consequences, in Cuba, an unfortunate country that Santiago appears not to understand very well, though I gather she was born there.

Before the revolution’s triumph in 1959, Cuba’s culture had accrued organically, going back to the colonization of the island in 1511 and the founding of Havana in 1519. The Cuban revolution has gone out of its way to eradicate this culture and destroy even its physical manifestations, which is why Havana’s once stately architecture has been purposely left to putrefy.

Cuba’s innate traditions prior to Year Zero are thus rendered by the revolution as corrupt and immoral, a narrative that the international left is only too happy to propagate. In the place of this culture, the revolution has imposed through force a fabricated one.

It is this process that a return to American norms would hope to arrest in this country.

An invitation to assimilate to practices that produce freedom and solidarity and have been part of the American character for centuries—truly the inclusive approach—would be a last-ditch attempt to return America to its organic traditions.