Pompeo: ‘America First’ Foreign Policy Is What the Founders Envisioned 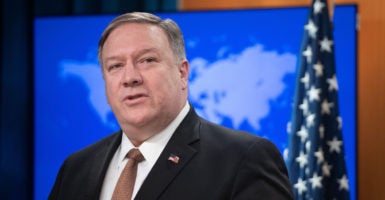 Secretary of State Mike Pompeo described the administration's foreign policy as in line with the Founders, who “sought to protect our interests but avoid adventurism.” (Photo: Saul Loeb/AFP/Getty Images)

The nation’s top diplomat argued that, rather than deviating from American norms, the Trump administration’s foreign policy is exactly the kind of approach that the Founding Fathers envisioned.

Though he didn’t use these words, Pompeo essentially cast President Donald Trump’s foreign policy as a modern “return to normalcy,” just as Warren Harding proposed in 1920 following World War I.

Pompeo suggested that in recent decades, presidents from both parties have deviated from the norms set by the Founders and indulged grandiose visions that have little place in the American tradition.

On the left, presidents have elevated humanity over the nation-state, prizing global consensus over the interests of ordinary Americans and thus betraying democracy. They also have sought to appease foreign powers, naively thinking that goodwill and friendship can override the raw power of national interests.

Meanwhile on the right, some presidents have sought to remake the world in America’s image through nation-building. Such projects ignore the unique cultural and historical conditions that allow ordered liberty to flourish in America, and not elsewhere.

As Pompeo showed, these visions go against the wisdom of the Founders. In particular, they abandon the Founders’ realistic view of human nature borne out through history.

“The Founders were keen students of human nature and history,” Pompeo noted. “They saw that conflict is the normative experience for nations. … And in response to this reality, the Founders knew the first duty of the federal government was to provide for the safety of its citizens.”

The Founders also understood that foreign policy must be restrained—though that hardly meant passivity in the face of threats. In Pompeo’s words, the Founders “sought to protect our interests but avoid adventurism.”

An early example was the First Barbary War, fought soon after the War of Independence, which “was an effort of last resort to protect our vital commercial interests.” Pompeo cited Thomas Jefferson, who advocated sincere yet realistic diplomacy:

Peace and friendship with all mankind is our wisest policy, and I wish we may be permitted to pursue it. But the temper and folly of our enemies may not leave this in our choice.

And finally, the Founders understood that they should respect other nations, not act as a predator on the world stage. Imperialism is not in the founding DNA.

As Pompeo noted, “The Founders had recently cast off the tyranny of an empire. They were not eager to subjugate others.”

To this point, he quoted President John Quincy Adams, who said America “goes not abroad in search of monsters to destroy,” but instead is “the well-wisher to the freedom and independence of all.”

In the years after the Cold War, the secretary of state said, “hopes were high that enfolding the likes of China and Russia into a so-called rules-based international order would hasten their domestic evolution towards democracy.”

Yet decades later, he said, we can see that “the Putin regime slays dissidents in cold blood and invades its neighbors” while China detains Uighur Muslims in labor camps and “uses coercion and corruption as its primary tools of statecraft.”

The Founders’ vision would have kept the U.S. chastened about global possibilities—even in the face of positive change. Yet post-Cold War presidents took their optimism too far and expected unrealistic outcomes.

Pompeo stressed that the Trump administration understands what is attainable and what is not. He noted that while the president “wishes every country enjoyed the freedoms we enjoy here, he has no aspiration to use force to spread the American model.”

He also dinged past administrations for embracing globalist priorities while neglecting the interests of ordinary Americans.

“We bought into trade agreements that helped hollow out our own middle class,” Pompeo said. “We sacrificed American competitiveness for accolades from the U.N. and climate activists. And we engaged in conflicts without a clear sense of mission. No more.”

“Countries all over the world are rediscovering their national identities, and we are supporting them,” Pompeo said. “We’re asking them to do what’s best for their people as well,” because “love of one’s country forces leaders to better honor the will of their own people.”

Global elites pay lip service to “democracy,” but as Pompeo pointed out, it is actually the nation-state that best protects true democracy and honors the will of the people. And the cornerstone of democracy is being able to fire your leaders.

“If democratic leaders are not responsive to the jolts of patriotism which are sweeping the world, they won’t be leaders for long,” he said. “Those who understand that nations are the best vehicle for securing the rights of their citizens will have a much longer shelf life.”

At the heart of this “America First” vision is a recognition that the world is fundamentally violent and unstable—and that makes America utterly unique. As Pompeo put it, the president “believes America is exceptional—a place and history apart from normal human experience.”

The particularity and uniqueness of America mean that it cannot be replicated elsewhere—at least not easily, and certainly not by U.S. coercion. The best we can do is protect the rare jewel that we have in America with a foreign policy that is muscular but not adventurist.

“America First,” at its best, means defending U.S. interests within a realistic view of the world. If that’s destructive to certain “norms,” they certainly aren’t the Founders’ norms.