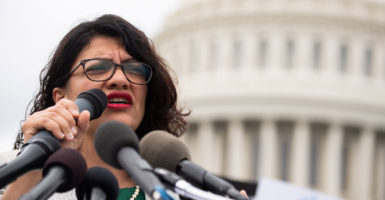 Rep. Rashida Tlaib, D-Mich., received massive blowback for both using the word “calming” when describing her feelings toward the Holocaust, as well as incorrectly stating that Palestinians provided a “safe haven” for the Jewish people. (Photo: Saul Loeb/AFP/Getty Images)

“I think most fourth graders know what the Holocaust was and she apparently doesn’t,” Cheney replied while appearing on “Fox & Friends.” “We have a situation today where those of us who are elected officials, in particularly elected officials in the House of Representatives where this anti-Semitism is rising within our body, have an obligation to stand up and stop it.”

Cheney’s comments were in response to Tlaib’s appearance on the “Skullduggery” podcast where she revealed that when she envisions the Holocaust, she gets a “calming feeling” because her Palestinian ancestors provided a “safe haven” for Jewish people.

“And just all of it was in the name of trying to create a safe haven for Jews, post-the Holocaust, post-the tragedy and the horrific persecution of Jews across the world at that time,” she continued. “I love the fact that it was my ancestors that provided that, right, in many ways. But they did it in a way that took their human dignity away and it was forced on them.”

Tlaib received massive blowback for both using the word “calming” when describing her feelings toward the Holocaust, as well as incorrectly stating that Palestinians provided a “safe haven” for the Jewish people.

In reality, Palestinians massacred Jews during the Holocaust and started a revolt against the British to prevent Jews from entering. Arab factions allied with the Nazis during World War II.

“There’s no context in which it is OK to say that a calming feeling comes over you when you think of the Holocaust. It’s sickening. Then of course Rep. Tlaib went on to talk about this view of history that is based on lies, exactly the kind of anti-Semitic lies that are spread to delegitimize the state of Israel,” Cheney said.

“Of course the Palestinian leadership in World War II actually worked with Adolf Hitler, so it’s gone beyond the pale with the leadership on the Democratic side in the House actually openly defending this kind of thing.”

“I’m sorry that there are so many anti-Semitic members of the House Democratic caucus,” Cheney said when asked if she’ll issue an apology. “We went yesterday from a situation where the Democratic leadership within the House had sort of been enabling this anti-Semitism by their silence … Yesterday was different. Yesterday we had both Speaker Pelosi and Majority Leader Hoyer stand up and defend those [anti-Semitic comments] .”