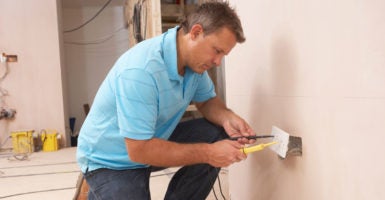 The five-member Sussex County Council, all Republicans, voted down the bill 4-1 on Jan. 9 after listening to County Attorney J. Everett Moore express concerns about its legality.

Moore read from an 11-page opinion, explaining why in his view the council doesn’t have the authority to pass a right-to-work law and would expose the county to legal action by labor unions.

And another Delaware attorney told The Daily Signal that he “could not disagree more” with the county attorney.

Generally, right-to-work laws prohibit employers in the private sector from entering into agreements that make union membership and payment of union dues a condition of employment for their workers.

A total of 28 states and the territory of Guam ban forced unionization as right-to-work jurisdictions, with Kentucky, Indiana, Michigan, Wisconsin, and West Virginia all making the move since 2012. Sussex County is one of three counties in Delaware.

While acknowledging the actions of counties in other parts of the country, Moore told Sussex County Council members he was not convinced, based on his reading of the law and case history, that the proposed ordinance could pass legal muster. He warned that the county would incur substantial legal fees defending the law in court at both the federal and state levels.

“Just because some other county has done that [pass a right-to-work law], does not give Sussex County the automatic right to do that,” he said during a Jan. 9 council meeting. “We have to look at their underlying legislation.”

Moore’s argument hinges on what he terms the “private law exception” in Delaware’s home rule statute. That provision prevents counties from enacting what the statute calls “private or civil law governing civil relationships” unless it is incidental to exercising “an independent municipal power,” Moore explains in his opinion.

While Delaware’s courts have not ruled on right-to-work legislation and ramifications for employment contracts, Moore points out, the courts have addressed the private law exception as it relates to authority delegated by the state to local governments.

Without question, this right-to-work ordinance, if adopted, creates the basis for a private civil action between citizens for any violations of this ordinance, and with Delaware cases expressly stating that the county may not create a private cause of action, it is my opinion that under current Delaware law, a court will find that the private law exception to the county’s home rule authority prohibits the county from enacting this ordinance.

The mayor of Seaford, a small city in Sussex County that passed its own right-to-work law just weeks ago, held a press conference Tuesday at City Hall to promote it.

“Seaford is strategically located close to several major markets and ports with great infrastructure and great people,” Mayor David Genshaw said later in an email to The Daily Signal.

“We are open for business and would like to invite those companies looking to expand or relocate to come check us out. Seaford is a perfect place to start.”

Other lawyers sharply disagree with the Sussex County attorney, saying they like Genshaw are convinced state law is firmly on the side of local right-to-work initiatives.

“The creation of a ‘private law exception’ is pure mythology,” Brent Yessin, a labor attorney who assisted Kentucky counties in their right-to-work efforts, said in an email to The Daily Signal.

“Weldin Farms is a riparian rights case,” Yessin said of the water rights at issue. “It merely holds that a developer can’t get away with flooding his neighbor’s land merely because the county approved his building permit.”

Theodore A. Kittila, a lawyer who represents the Caesar Rodney Institute, a Wilmington-based free-market think tank, submitted to Sussex County a formal legal analysis of the right-to-work proposal as it relates to home rule. In it, Kittila finds that a Delaware Supreme Court case from 1982, Hickman v. Workman, is more applicable.

“Hickman is more on point in light of the fact that it pertains to the county government acting, not a private citizen seeking to advance his or her argument in litigation,” Kittila writes.

The state Supreme Court took a “much broader view of the grant of authority under the Sussex Home Rule Act” than it did in the Weldin Farms case, he says.

Unless the Delaware General Assembly decides to act on the right-to-work front, officials in the state’s three counties are permitted to pass their own ordinances, Kittila concludes.

In an email, Kittila told The Daily Signal that he “could not disagree more” with Moore:

The courts there were unpersuaded that such private rights could be inferred—and correctly so: There was no county action making clear that it was engaging in a policy choice to provide parties such as those in Glassman and Garrett with the ability to act. Home rule, by definition, concerns the county’s ability to make a policy decision and pass ordinances to deal with that policy choice.

The General Assembly granted the county all authority that it had to pass such ordinances. Therefore, Hickman is the most persuasive of any of the cases. And Hickman supports the policy choice: Where there was no restriction by the state and a clear connection to the goals of county home rule (economic development of the county), there was a solid basis for support.

Moore did not respond to The Daily Signal’s requests for comment on the criticism.

In his opinion, Moore also took issue with right-to-work proponents who cite a ruling from the 6th U.S. Circuit Court of Appeals upholding a local right-to-work law in Hardin County, Kentucky. In October, the U.S. Supreme Court rejected a petition to hear an appeal of that case, which means the 6th Circuit ruling stands.

Lawyers who differ with Moore’s reading of the law suggested to Sussex council members that in doing so, the nation’s highest court signaled to other federal courts that it ultimately would uphold local right-to-work laws.

But Moore is not convinced. The Hardin County case “may influence, but will not control” any ruling from the 3rd Circuit Court of Appeals, which covers Delaware, the Sussex County attorney said.

The idea that Delaware can take inspiration from the Kentucky case is “patently false,” Moore argues, because the Hardin County ordinance “did not cite to a home rule statute for its authority and home rule analysis had no part in that opinion.”

In a rejoinder emailed to The Daily Signal, Yessin said it was the county attorney who made a “patently false” assertion related to right-to-work laws in Kentucky’s Hardin and Warren counties:

He [Moore] says ‘Hardin County did not cite to a home rule statute for its authority … ,’ which is patently false. The Kentucky ordinances specifically say (in Section 1, so he wouldn’t have had to read far): ‘This ordinance is enacted pursuant to the authority granted to the Fiscal Court of Warren County as a political subdivision of the Commonwealth in accordance with the laws set forth in the Kentucky Revised Statutes and the laws of the United States of America.’

Moore also said the Kentucky case that led to the 6th Circuit ruling “is not the last word,” since the U.S. District Court for the Northern District of Illinois “considered the same precedent as the Hardin County case, but respectfully disagreed with the 6th Circuit’s conclusion.”

Moore was referring to a case out of Lincolnshire, Illinois, and currently on appeal to the 7th Circuit. Again, Yessin, the labor lawyer, also disputed his analysis:

In fact, that is EXACTLY what the 6th Circuit examined. It wasn’t an advisory lecture on federalism, it was about whether the states were preempted from delegating their power to prohibit union security clauses. It was in fact the only issue.

That’s obvious because of course no one has ever suggested that states are preempted from delegating powers to their subdivision as a general matter because of course that would be unconstitutional, as presumably any first-year law student not named Everett Moore must know.

Despite the ruling out of the 6th Circuit, Moore maintains that the National Labor Relations Act, the federal law governing private sector employment, “likely preempts” any county effort to pass right to work. (That law is also known as the Taft-Hartley Act.)

If the 7th Circuit were to uphold the ruling by a lower federal court in Illinois, the action would conflict with the 6th Circuit ruling and the U.S. Supreme Court almost certainly would enter the fray.

Mike Buchanon, the elected administrator of Warren County, Kentucky, who was instrumental in pushing local right-to-work laws in his state, told The Daily Signal in an email that it was a mistake for Delaware officials to be cowed by legal threats from unions and others.

“I understand the pressure that union attorneys can put on an elected body, but I am a bit surprised that they were as effective in their scare tactic in Delaware after they saw the results of the unions’ failed legal action in the federal court system,” said Buchanon, a Republican who serves as Warren County’s judge executive.

Unions always file suits. That’s what they do. They file suits against all the states who pass right-to-work [laws] as well. They sued Kentucky [and] Wisconsin, and I suspect every other state who has passed right-to-work and protected their citizens’ rights.

But in the end, the people of the counties and states who’ve protected their workers’ rights have stimulated their economies, strengthened their business climate, and brightened the futures of all their citizens.