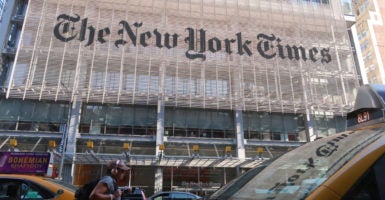 The New York Times no doubt considers it quite a coup to have obtained and published President Donald Trump’s tax return information from 1985 to 1994. But doing so violated Trump’s right under federal law to the confidentiality of his tax returns.

The Times—which reported that Trump’s businesses lost $1.17 billion during the 10-year period—has no more right to Trump’s tax returns than it has to mine or those of any of you reading these words.

Confidentiality, as the 9th U.S. Circuit Court of Appeals held in 1991 in U.S. v. Richey, is essential to “maintaining a workable tax system.”

Taxpayer privacy is “fundamental to a tax system that relies on self-reporting” since it protects “sensitive or otherwise personal information,” said then-Judge (now Supreme Court Justice) Ruth Bader Ginsburg in 1986 in another case when she served on the U.S. Court of Appeals for the District of Columbia.

Regardless of the accuracy or inaccuracy of The New York Times story, tax returns themselves, as well as tax return information such as these IRS transcripts (which are a summary of the tax returns), are protected from disclosure by federal law. And this provision applies to private individuals as well as government employees, a fact that should be considered by the New York Times’ source.

According to the newspaper, it did not actually obtain Trump’s tax returns but “printouts from his official Internal Revenue Service tax transcripts, with the figures from his federal tax form, the 1040, from someone who had legal access to them.”

The Times quotes a lawyer for the president, Charles J. Harder, as saying that the tax information in the story is “demonstrably false” and that IRS transcripts, particularly from the days before electronic filing, are “notoriously inaccurate.” However, that claim is disputed by a former IRS employee now at the liberal Urban-Brookings Tax Policy Center.

The president tweeted Wednesday in response to the Times story: “Real estate developers in the 1980’s & 1990’s, more than 30 years ago, were entitled to massive write offs and depreciation which would, if one was actively building, show losses and tax losses in almost all cases. Much was non monetary. Sometimes considered ‘tax shelter,’ … you would get it by building, or even buying. You always wanted to show losses for tax purposes….almost all real estate developers did – and often re-negotiate with banks, it was sport. Additionally, the very old information put out is a highly inaccurate Fake News hit job!”

Regardless of the accuracy or inaccuracy of The New York Times story, tax returns themselves, as well as tax return information such as these IRS transcripts (which are a summary of the tax returns), are protected from disclosure by federal law. If the newspaper obtained this information from an employee of the IRS, that employee will be in big trouble if he or she is identified.

Could the editors and reporters at The New York Times be prosecuted for publishing this information?

Section (a)(3) of the law makes it a felony for any person who receives an illegally disclosed tax return or return information to publish that return or that information. But it’s unknown if the bar on publication by a media organization could survive a First Amendment challenge.

What we do know is that in previous incidents, the government did not attempt to prosecute the publisher of tax return information. In 2014, the IRS agreed to pay the National Organization for Marriage $50,000 to settle a lawsuit after an IRS clerk illegally disclosed the organization’s tax return.

Although the IRS paid to settle the lawsuit, none of the individuals or organizations involved in the illegal disclosure and publication were prosecuted.

If such a prosecution were attempted, there is no doubt that a First Amendment challenge would be filed.

The courts would then have to answer an important question: Are the interests of the government in an effective tax system and that of citizens in maintaining the confidentiality of their financial information outweighed by the First Amendment right of the press, and by and the public’s interest in obtaining financial information on elected officials?

In the midst of this illegal disclosure to The New York Times, Treasury Secretary Steven Mnuchin announced Monday that he would not comply with a demand by House Ways and Means Committee Chairman Richard Neal, D-Mass., to provide the committee with copies of tax returns filed by Trump and eight of his companies for the last six years.

Mnuchin sent a letter to Neal telling him that “the Supreme Court has held that the Constitution requires that congressional information demands must reasonably serve a legitimate legislative purpose.”

The court decisions supporting Mnuchin’s decision include the 1957 decision in Watkins v. U.S., in which the Supreme Court told the House Un-American Activities Committee that “there is no congressional power to expose for the sake of exposure” the “private affairs of individuals.”

Neal has claimed that the legislative purpose of getting the Trump tax returns is to examine how the IRS audits presidents. But as Trump’s legal counsel has pointed out, Neal didn’t ask for the tax returns of any other presidents and hasn’t asked any questions of any kind about IRS policy and procedures for such audits.

Mnuchin tells Neal in his letter that he is willing to provide the congressman with complete information on “how the IRS conducts mandatory examinations of Presidents, as provided by the Internal Revenue Manual.”

If examining how the IRS audits presidents is really Neal’s legislative purpose—as opposed to simply wanting to expose anything embarrassing the committee finds in Trump’s tax returns—IRS information on its policies and procedures would be the only information the House committee would need.

So the Treasury Department has put House Democrats in check for now. It will probably be up to the courts to see who achieves checkmate when it comes to the Trump tax returns.

Now the interests of protecting the privacy of taxpayers warrants the opening of a government investigation to find the leaker who provided the Trump tax information to The New York Times.

The IRS and the Justice Department should investigate how this disclosure happened, find out who did it, and prosecute anyone who violated the law.