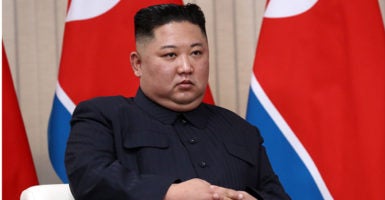 That’s the assessment of Bruce Klingner, senior research fellow for Northeast Asia at The Heritage Foundation.

“This was a law enforcement procedure,” he said.

The 17,000-ton cargo vessel, named the Wise Honest, was reportedly used to illicitly ship coal from North Korea and deliver heavy machinery back to the country, according to the Justice Department.

“Today’s action by the Justice Department was a positive step in enforcing U.N. resolutions and U.S. laws,” Klingner said. “Successive U.S. administrations, including the Trump administration, have pulled their punches on fully implementing U.S. laws. Hopefully, President [Donald] Trump will not reverse today’s actions as he did law enforcement measures by the Treasury Department in March.”

The ship’s allegedly illegal cargo became a U.S. legal matter because payments for maintenance of, equipment for, and improvements to the Wise Honest were made in U.S. dollars through unwitting U.S. banks, in violation of U.S. law, according to the Justice Department.

“This sanctions-busting ship is now out of service,” Assistant Attorney General for National Security John C. Demers said in a statement. “North Korea, and the companies that help it evade U.S. and U.N. sanctions, should know that we will use all tools at our disposal—including a civil forfeiture action such as this one or criminal charges—to enforce the sanctions enacted by the U.S. and the global community.

“We are deeply committed to the role the Justice Department plays in applying maximum pressure to the North Korean regime to cease its belligerence,” Demers said.

U.S. Attorney Geoffrey Berman of the Southern District of New York said this was the “first-ever seizure of a North Korean cargo vessel for violating international sanctions.”

“I don’t think it has anything to do with the missile launches or negotiations,” Klingner said. “People will ask, ‘Why today?’ My guess is, it’s a process matter. It’s not a major increase in U.S. pressure.”

“We’re looking at it very seriously right now,” the president said. “Nobody’s happy about it. … I don’t think they’re ready to negotiate.”

In March, the Treasury Department imposed additional sanctions on North Korea, and White House national security adviser John Bolton praised the move. However, Trump almost immediately reversed the move by his own officials.

“President Trump says he has applied maximum pressure, but he has not. In the first year and a half, the administration applied more pressure on North Korea than the Obama administration did during eight years,” Klingner said.

“That was good, but since Singapore, the administration has gone the opposite direction. Trump actually did something Obama never did; that’s reverse actions against North Korea. This [ship seizure] is not a case of Trump being tough on North Korea,” he said.