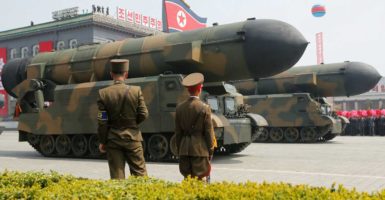 Both the Trump administration and North Korea are ratcheting up statements about a potential conflict.

“President [Donald] Trump has changed the equation. We don’t know what he will do,” said Fred Fleitz, a senior vice president for the Center for Security Policy, a conservative national security think tank. “If there is a strike, shooting down missiles would be proportional. But I don’t think we will see a strike on missile sites.”

When visiting South Korea on Sunday, Vice President Mike Pence said “the era of strategic patience is over.” This came days after the North Korean state-run media asserted the country is “ready to react to any mode of war desired by the U.S.”

“Drawing red lines hasn’t worked well in the past. He holds his cards close to the vest and I think you’re not going to see him telegraphing how he’s going to respond to any military or any other situation going forth,” Spicer said. “The action he took in Syria shows, when appropriate, the president takes decisive action.”

President Barack Obama famously said that if Syrian dictator Bashar Assad used chemical weapons on his own people, it would be a “red line,” but when Assad did so in 2013, Obama took no action.

“North Korea will eventually have missiles pointed at U.S. bases, in Japan or elsewhere,” Fleitz said. “North Korean nuclear weapons have two purposes, deterrence and extortion. We have bought them off for years, then they break their commitments and we buy them off again for a little while, while their technology gets more and more advanced. This cycle can’t continue.”

The failed missile launch was rumored to be sabotaged by the U.S., but Fleitz said he thinks it more likely demonstrates that even while North Korean technology is advancing, it’s still inadequate.

“The failure of the missile test is a failure of their science and engineering. It’s hard to build an arsenal with stolen and borrowed parts,” Fleitz said. “Ph.D.s from MIT aren’t running to North Korea. There isn’t a lot of job security. If your project fails, you’ll be executed.”

A strike group of Navy warships was deployed toward North Korea. The USS Carl Vinson, which is part of the strike group, is capable of carrying 90 fixed-wing aircraft and helicopters.

“The results of [the meeting], I think, is you’ve seen China playing a much more active role in North Korea, both politically and economically, that they can continue to apply pressure to achieve results,” Spicer said. “I think we’re going to continue to urge China to continue to exert that influence to get better results.”

China shouldn’t be trusted this time around, said Bruce Klingner, senior research fellow for Northeast Asia at The Heritage Foundation.

“A succession of U.S. presidents all thought China would take action against North Korea, but after one to four months of action, China would always back off,” Klingner told The Daily Signal.

He said “giving China another chance” has too often led to not enforcing the law and existing sanctions.

Klingner said he has concerns about the new U.S. posture on North Korea. For instance, a strike could prompt North Korea to strike South Korea immediately.

“Many people believe it is useful to put pressure not only on North Korea but also on China,” he said. “Others, including myself, worry this could be unnecessary provocation. South Korea is having a presidential election now and the top debate question is how will the candidates prevent the U.S. from a pre-emptive attack on North Korea. It may be a negotiating tactic but a very high stakes one.”