An Illegal Immigrant Killed Her Son, a Police Officer. Here’s How This Mom Fights to Save Others. 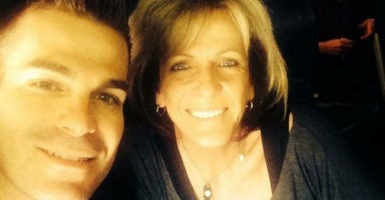 Mary Ann Mendoza with her son, Brandon, a police sergeant who was on his way home from work five years ago when a car driven by an illegal immigrant plowed head-on into his vehicle in Tempe, Arizona. (Photo courtesy of Mary Ann Mendoza)

A mother whose son died after a car wreck caused by an illegal immigrant with a criminal record who was drunk and high on drugs says his death left a permanent scar on her life.

“When he was taken from me, there was a huge part of my life that was taken,” Mary Ann Mendoza told The Daily Signal in an interview about her son Brandon, who served as a police sergeant in Mesa, Arizona.

Mendoza, a Realtor who now also calls herself an activist against illegal immigration, founded Angel Families with another woman who lost a daughter to an illegal immigrant and drunk driver.

Five years ago, Mendoza and her son had just celebrated Mother’s Day by having dinner together the day before the accident.

Brandon Mendoza was on his way home from work on May 12, 2014, when a vehicle driven by the repeat offender “slammed head-on” into his car in Tempe, she said.

Her son died in surgery about three hours later. He was 32.

Raul Silva-Corona, 42, the illegal immigrant responsible for the crash, was determined to be “three-times-the-legal-limit drunk, high on meth, [and] had driven over 35 miles the wrong way on the freeways here in Phoenix,” Mendoza said.

Mendoza wrote a letter to President Barack Obama in July 2014 asking for answers about her son’s death and why her son’s killer had not been deported.

Brandon was the only one of her four children who wasn’t married with kids of his own, she told The Daily Signal, so they used to travel and do other things together.

Mendoza, who is divorced and lives in Mesa, said she was awakened by a call about 2:45 a.m. to inform her that her son had been in a terrible accident:

I was woke up out of deep sleep, and I kept trying to call Brandon’s cell phone. He wasn’t answering, and a few minutes later the Mesa Police Department came to my house, rang the doorbell. I knew when we drove up to the hospital, the police presence there, I just knew that it wasn’t good. That’s the day that my life changed forever.

Silva-Corona, the illegal alien, reportedly was not deported in 1994 after being convicted of several crimes in Colorado. He also died from injuries sustained in the crash.

Mendoza, who met in March with President Donald Trump in the Oval Office, said her son had a generous heart.

“He spent a lot of time at the Boys and Girls Club at the Mesa Arts Academy, [and] made sure that the children knew the importance of staying in school, staying out of gangs, staying away from drugs,” Mendoza said.

Mendoza said Brandon “would spend his own money and go and get pizza or ice cream for them after he had spent his time off playing kickball with them in the park.”

Her son also bought presents for area children who weren’t going to be able to have much for Christmas.

Mendoza founded Angel Families with Michelle Root, whose daughter Sarah was killed in 2016 in Omaha in a car crash caused by Eswin Mejia, a 19-year-old illegal immigrant from Honduras who police said was driving drunk.

The two angel parents’ organization works to educate the public about crimes committed by illegal aliens and bring them to the forefront of society. “Angel parents” refers to those whose children have been killed by illegal immigrants.

Mendoza said her son’s death at the hands of an illegal immigrant underscores the increasing need for border security and immigration reform.

“The thing that really catapulted me into this fight was the leniency that’s shown to illegal aliens in our court system, because my son’s killer was a repeat illegal alien criminal, and that is what you hear so many times,” she said.

“A lot of these angel families, their loved ones have been killed by an illegal alien who’s already committed a crime in our country, [but] was shown leniency or served no jail for the crime they committed, that you or I would be in jail for. So, that kind of catapulted me into this,” Mendoza said.

Mendoza and fellow activists are working on a campaign they call Blood on Your Hands.

We want to start calling these politicians out. Real soon here, we’re going to have billboards coming up across the United States. [They’re] going to show pictures of our loved ones, and talk about, ‘My son was killed by a repeat illegal alien criminal,’ ‘This person was killed by a Dreamer.’

Every one of our billboards are going to [say] #BloodOnYourHands, until Americans start realizing you’re electing politicians into office who don’t care about you.

She said critics are incorrect to say that pushing for immigration reform is hateful or racist.

“A lot of people say, ‘It’s racial, you’re just doing this in a hateful way,’” Mendoza said. “You know, illegal aliens aren’t a race. They’re people from all over … and I’m not saying anything about one particular race. I’m saying people who are illegally present in our country have got to be stopped.”

She said the most important thing people can do is become informed on the issue of illegal immigration.

“Start educating yourself,” Mendoza said. “Get on websites that give you the truth. Don’t read a headline and believe that it’s the truth. You have to know, illegal alien criminals are committing more crimes at a larger rate than American citizens are.”