Where the US-Iran Confrontation Is Heading 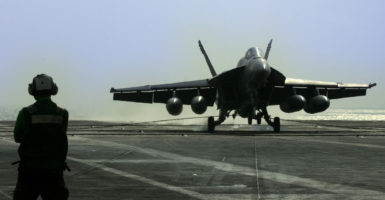 The USS Abraham Lincoln is headed to the Persian Gulf as part of a task force to address a recent Iranian threat. (Photo: Matthew Fearn - PA Images/Getty Images)

The slow-motion confrontation between the United States and Iran is heating up, one year after Washington withdrew from the Iran nuclear deal.

In response to a number of troubling and escalatory indications and warnings, the United States is deploying the USS Abraham Lincoln Carrier Strike Group and a bomber task force to the U.S. Central Command region to send a clear and unmistakable message to the Iranian regime that any attack on United States interests or on those of our allies will be met with unrelenting force. The United States is not seeking war with the Iranian regime, but we are fully prepared to respond to any attack, whether by proxy, the Islamic Revolutionary Guard Corps, or regular Iranian forces.

CNN reported that “specific and credible” intelligence indicated that Iranian forces and proxies were preparing for a possible attack against U.S. personnel or allies in Syria, Iraq, or at sea.

Intelligence provided by Israel reportedly was at least part of the reason for the warning and the naval redeployment.

The carrier strike group had been scheduled to deploy in the Persian Gulf after exercises in the eastern Mediterranean Sea, but it was diverted to expedite its arrival and boost the Pentagon’s capabilities for deterring, defending against, and retaliating for possible Iran-sponsored attacks.

Secretary of State Mike Pompeo also was diverted, canceling a diplomatic mission to Germany to head to an undisclosed location. Pompeo warned, “If these actions take place, if they do by some third-party proxy, a militia group, Hezbollah, we will hold the Iranian leadership directly accountable for that.”

Iran’s Islamist regime historically has used Hezbollah, Iraqi militia groups, and Palestinian surrogates to attack its enemies by “fighting to the last Arab.”

And just last weekend, Iran backed the Palestinian Islamic Jihad group’s provocations that triggered the fiercest military clash between Israel and Hamas in Gaza since the 2014 Gaza war.

This week’s events are the latest in a series of escalations by the U.S. and Iran. On April 8, the Trump administration designated Iran’s Islamic Revolutionary Guard Corps as a foreign terrorist organization.

Iran’s President Hassan Rouhani responded by signing a measure that declared all American forces in the Middle East terrorists and labeling the U.S. a state sponsor of terrorism.

On April 22, Pompeo announced that Washington was not renewing waivers that allowed eight countries to continue buying Iranian oil after the resumption of U.S. oil sanctions on Iran last November.

This action ratcheted up sanctions to unprecedented levels under the Trump administration’s “maximum pressure” campaign.

Senior Iranian officials responded by repeating past warnings that if the U.S. stops Iran from selling oil, Iran will take action to prevent other Gulf oil-producing countries from exporting their own oil.

The easiest way for Iran to do that is to try to block the Strait of Hormuz, the 21-mile-wide waterway at the eastern end of the Gulf, through which flows approximately 30% of the world’s seaborne oil shipments.

The potential Iranian threat to this key strategic chokepoint is another reason the U.S. Navy has expedited the deployment of the carrier battle group to the region.

Iran’s next move may come on the nuclear front. Iranian media have reported that Rouhani will announce the resumption of some halted nuclear activities on Wednesday, the first anniversary of the U.S. withdrawal from the 2015 nuclear agreement.

It is unclear whether this means Iran will formally withdraw from the agreement—but it could explain why Pompeo suddenly canceled his visit to Germany.