The Senate Has Confirmed Trump’s 100th Judge. Let’s Put That Number in Perspective. 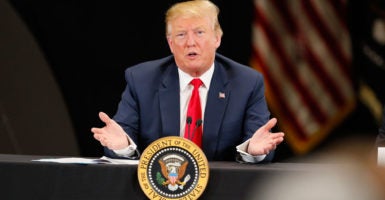 President Trump, pictured at an event in Minnesota last month, is facing judicial vacancies that are actually 25% higher than when he took office. (Photo: Adam Bettcher/Getty Images)

That’s a nice, round number, and it might sound like a significant milestone, but let’s put that number in perspective.

Trump achieved that mark ahead of some presidents, but behind others. In fact, the 849 days it took for Trump is almost exactly the average 848 days it took the previous five presidents.

But that’s really where the similarities end.

President Bill Clinton, for example, appointed 100 judges in his second year alone, with a Senate of his own party. President George W. Bush hit the 100 mark five months earlier than Trump with a Senate controlled by the opposition party.

It took President Barack Obama five months longer to reach 100, but he made nominations at a much slower pace, and judicial vacancies averaged 32% less than under Trump.

Single confirmation totals fail to account for important aspects of the appointment process.

The better measure is the percentage of a president’s nominees confirmed in a particular period of time. As the Judicial Appointment Tracker shows, Trump’s 57.3% confirmed to date is well below the average of 80.5% for the previous five presidents at this point.

A few other facts make this even more shocking.

Not only has the Senate been controlled by Trump’s own party since he took office, but he has made nominations at a faster pace than previous presidents, and the Judiciary Committee has been holding hearings for more nominees than in the past.

Those circumstances create the natural expectation that confirmations would be ahead of the pace and that vacancies would be steadily declining.

The opposite is true because of what’s happening on the Senate floor, the last stage of the appointment process. That’s the stage where both political parties can have a big influence, and Democrats have had a systematic campaign since January 2017 to minimize Trump’s impact on the judiciary.

As a result, the federal judiciary is in its longest period of triple-digit vacancies in nearly three decades.

To see how radically things have changed, compare how Obama and Trump judicial nominees have been treated during the same period of time.

Between January 2009, when Obama took office, and May 6 of his third year, the Senate confirmed 83 judges. Republican senators serving during that period each opposed an average of 7% of Obama’s nominees.

Between January 2017, when Trump took office, and May 6 of this year, the Senate confirmed 102 judges. Democratic senators serving during that period each opposed an average of 47% of Trump’s nominees.

So, while passing the 100 mark is worth noting, the Senate is actually behind the confirmation pace.

Vacancies are actually 25% higher than when Trump took office, and the percentage of those vacancies designated as “judicial emergencies” is nearly at an all-time high.

With a sky-high number of vacancies, 100 judges is just a down payment.