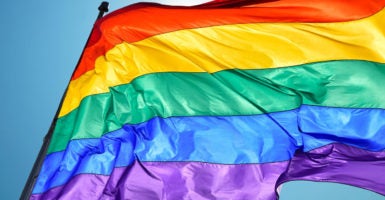 The Chamber of Commerce "seemed to make the break with conservatives official—stunning everyone with its endorsement of the most extreme piece of LGBT activism ever introduced: the Equality Act," Tony Perkins writes. (Photo: mbolina/Getty Images)

Inside the U.S. Chamber of Commerce, workers are already ripping up the ancient teal carpet. By summer, the outside columns will be covered in scaffolding—part of an expensive renovation project meant to give the 100-year-old headquarters a new look.

But as far as most conservatives are concerned, the chamber’s real transformation was already well underway: a radical makeover that’s gone beyond what the building looks like—to what it stands for.

According to The Washington Post, the chamber is tired of aligning with Republicans and wants to “rebuild” as a more inclusive brand.

“We cannot just single-source our politics through one party,” says Tom Wilson, chairman of the organization’s board. It’s time, he insists, to “fundamentally act differently.” That mission has certainly been accomplished in the last handful of years, as the chamber wades into radical social policies that are increasingly dividing the business community.

In its latest charm offensive to Democrats, the chamber seemed to make the break with conservatives official—stunning everyone with its endorsement of the most extreme piece of LGBT activism ever introduced: the Equality Act.

For an organization whose sole purpose is to protect American enterprise, the move came as a shock to anyone familiar with the oppressive realities of the Equality Act, known as HR 5, the bill pushed by House Speaker Nancy Pelosi, D-Calif.

The whole point of the Chamber of Commerce, Family Research Council’s Peter Sprigg points out, is to “advocate for pro-business policies that create jobs and grow our economy.” Its website even lists “regulatory relief” as a priority issue. So why, Sprigg asks, would they send a letter to Congress asking, in effect, “Please regulate us more!”

Instead of giving businesses the freedom to set their own policies on “sexual orientation” and “gender identity,” the Chamber of Commerce thinks the government should force them to adopt restroom policies as unsafe as Target’s.

And under this bill, U.S. businesses wouldn’t just be punished for having gender-specific restrooms or showers, they’d also be hauled into court over hiring practices, dress codes, insurance coverage—anything that doesn’t give a unique advantage to people who identify as gay or transgender.

If a day care wants its staff to dress like their biological sex, too bad! If a small family store doesn’t have the money to cover an $89,050 gender reassignment surgery, their loss. Worried about the legal fees for workplace disputes or the cost of a gender-free facility overhaul? Get in line. If the Equality Act passes, the government will be able to dictate what people believe—and torment those who don’t submit. How’s that for the “free” market?

That’s the irony of this debate. The corporate elites who’ve been blinded by this rainbow are actually lobbying for less freedom for themselves. The Chamber of Commerce, like the big wigs at Apple, Google, and others, are demanding conformity on an issue that people should be deciding with their own dollars.

If consumers don’t like what a company stands for, they can shop elsewhere. If these politically-correct policies are benefiting LGBT-friendly businesses as much as the chamber says they are, then why “invite the heavy hand of government to intervene?”

If organizations like the chamber won’t count the moral costs of H.R. 5, then maybe they’ll count the financial ones.

Some LGBT activists, Sprigg writes, “argue that gender-identity laws benefit the economy as a whole. We can test that proposition empirically. Twenty of the 50 states already have sexual orientation-gender identity laws for employment, public accommodations, and housing [very similar what the Equality Act would impose nationally]. Do those 20 states have an economic advantage over the 30 states that have declined to adopt such laws? The answer, in brief, is no.”

CNBC published a ‘scorecard on state economic climate’ in July 2018, ranking ‘America’s Top States for Business.’ Six of the 20 highest-ranked states had such laws—but so did nine of the twenty lowest-ranked ones. Forbes published its own list of ‘Best States for Business‘ in November 2018. Of the top seven states, not one had full protections, and only four of the top 13 had them. So did eight of the bottom 13.

Employment numbers tell a similar story—so do population migrations and the American gross domestic product. There is absolutely no evidence that the Equality Act will help the economy. There is, on the other hand, piles of it proving what most conservatives already know: True freedom is what leads to economic growth.

When the Chamber of Commerce needed allies in the fights against taxes and government reform, do you think it called liberal politicians? Of course not. It leaned on the same conservatives it’s betraying in this debate.

If Big Business wants to be a willing hostage of LGBT activists and abandon the principles that make companies successful, be our guest. But these same CEOs had better not come knocking when their profits are on the line—not if they’re just going to spend them attacking the conservatives’ values.