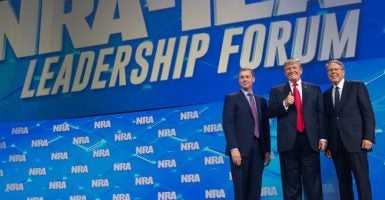 President Donald Trump on Monday called the New York state attorney general’s newly announced probe of the National Rifle Association illegal, and an expert on laws regarding nonprofits contends that the probe is at minimum improper.

Trump said it was a concerted effort to “take down and destroy” the NRA.

“When a state attorney general uses the power vested in the attorney general’s office to improperly use [it] against organizations for political purposes, it could be illegal,” Cleta Mitchell, a Washington lawyer who advises nonprofits and was co-counsel to the NRA in a 2002 Supreme Court case, told The Daily Signal.

“The NRA, in court, would have a good predicate to argue political bias against the organization to show that hostility toward the organization’s existence,” Mitchell said.

Over the weekend, the attorney general’s office announced it commenced an investigation into the NRA’s nonprofit status and would be subpoenaing financial records.

The announcement came in the midst of turmoil in the organization, after the NRA ousted Oliver North as president in what became a public dispute between North and NRA Chief Executive Wayne LaPierre. North reportedly said he was forced out because he alleged financial improprieties.

Even the liberal American Civil Liberties Union filed a brief on behalf of the NRA last year that argued New York “indisputably targeted the NRA and similar groups based on their ‘gun promotion’ advocacy.”

The ACLU brief continued: “It is important to note that, however controversial it may be, ‘gun promotion’ is core political speech, entitled to the same constitutional protection as speech advocating for reproductive rights, marijuana legalization, or financial deregulation.”

New York Attorney General Letitia James pledged as a Democratic candidate for the office to “use the constitutional power as an attorney general to regulate charities, that includes the NRA, to investigate their legitimacy,” it noted.

The new probe could be entirely legitimate, but it faces questions because of New York’s past actions, said Amy Swearer, a senior legal policy analyst at The Heritage Foundation.

“State AGs certainly have a duty to investigate credible allegations of financial misconduct by nonprofits incorporated in their states,” Swearer told The Daily Signal. “At this point, it’s unclear what evidence exists that might threaten the NRA’s nonprofit status, but this type of investigation is not in and of itself unlawful.”

Unfortunately, as the president alluded, New York has a long history of taking actions against the NRA to silence the organization’s pro-Second Amendment voice, and even the ACLU has come to the NRA’s defense over recent unconstitutional attempts by New York to stifle the organization financially.

Because of the state’s history of taking unconstitutional and bad-faith actions against the NRA, a dark cloud of suspicion will justifiably continue to hang over what might otherwise be a justified and good-faith investigation.

The NRA is clearly working through some internal problems, and the president is right to suggest that this distracts the organization from what it does best—working to strengthen the Second Amendment against those who would rather destroy its protections.

Trump tweeted on Monday that New York Gov. Andrew Cuomo and the attorney general “are illegally using the state’s legal apparatus to take down and destroy this very important organization.”

The president said the NRA “must get its act together quickly, stop the internal fighting.”

An NRA spokesman did not respond to phone and email inquiries for this article.

“Attorney General Letitia James is focused on enforcing the rule of law. In any case we pursue, we will follow the facts wherever they may lead,” the office said in a public statement. “We wish the president would share our respect for the law.”

The New York attorney general’s office has subpoenaed banks for financial records related to the Trump Organization, the president’s business, and is suing the Trump Foundation charity.

“This is the same office that has gone after the Trump Foundation,” Mitchell said. “The attorney general obviously has a pattern and practice of going after an organization it does not like.”