Trump Just Ditched a UN Arms Treaty, and He Was Right to Do It 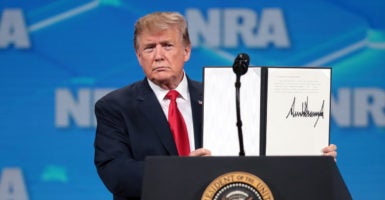 On Friday, at the annual meeting of the National Rifle Association, President Donald Trump announced that he was un-signing the Arms Trade Treaty. As he put it, “The United Nations will soon receive a formal notice that America is rejecting this treaty.”

He then pulled out a pen and, in front of the entire audience, signed a message asking the Senate to end its consideration of the treaty.

I have followed the Arms Trade Treaty closely since 2009, before the formal negotiations for it even began. The treaty purports to require nations to regulate the conventional arms trade. President Barack Obama signed it in 2013, but the U.S. never ratified it.

I have no doubt that the president has made the correct decision—and no doubt that he will be hammered for it by the progressive left, who loves to praise the treaty as much as it enjoys blaming the United States.

If you would like to read my argument against the treaty, it’s here. More importantly, the White House has released a short statement explaining the president’s decision. It is a model of clarity and accuracy. I doubt that the treaty’s friends will have any time for it, but that is their loss. I would love to see them try to rebut it.

A few points about the White House’s statement:

I could not have written the White House’s statement any better. It is a slam dunk. I commend the White House for its decision, and for explaining it effectively and correctly.

This is not the end of the story of the Arms Trade Treaty. It still has 101 state parties around the world. The U.S. needs to follow up this decision to un-sign by pulling all U.S. funding from the treaty. And there are other bad treaties and institutions of the same type as the Arms Trade Treaty. We should quit them, too.

Most fundamentally, while it’s excellent to quit bad treaties, it’s even better not to let them get made in the first place. Far too often, the U.S. finds itself in the position of a hockey goaltender, who just has to stand there and stop shots. If you just let the other guy keep shooting, sooner or later you’re going to get scored on.

We need to take hold of the puck, skate down the ice, and put some pressure on the other side.