Ignore Medicare for All Advocates’ Claims on Life Expectancy in US. Here Are the Facts. 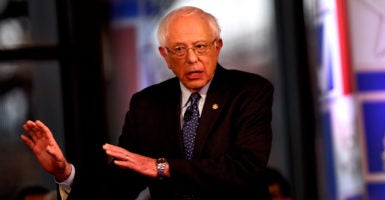 Sen. Bernie Sanders often reminds us that the United States spends roughly twice as much per capita on health care as most other economically advanced countries, but American life expectancy is lower than that of almost all these high-income nations. (Photo: Mark Makela/Getty Images)

Sen. Bernie Sanders, I-Vt., chief sponsor of the Senate “Medicare for All” bill (S. 1804), often reminds us that the United States spends roughly twice as much per capita on health care as most other economically advanced countries, but American life expectancy is lower than that of almost all these high-income nations.

Reps. Pramila Jayapal, D-Wash., and Debbie Dingell, D-Mich., lead sponsors of the House’s Medicare for All bill (H.R. 1384) say, “The quality of our health care is much worse than [that of] other industrialized countries. The life expectancy in the U.S. is lower than other nations, while our infant mortality is much higher.”

These are misleading generalizations. In fact, American medical outcomes for the most serious conditions—for example, lower mortality from heart attacks and strokes, as well as survival rates from a variety of cancers—are generally superior to those of other advanced countries.

America’s high level of investment in advanced medical technologies, including innovative drug therapies, has improved medical outcomes and has directly contributed to longer life expectancy among our senior citizens.

According to the “Economic Report of the President,” issued in March:

The United States’ all-cause mortality rates relative to those of other developed countries improve dramatically after the age of 75 years.

In 1960—before Medicare—the U.S. ranked below most EU countries for longevity among those [ages 50 to 74], yet above them among those age 75 and higher. This pattern persists today.

True, America needs to improve overall life expectancy at birth. According to a major 2018 study of 11 high-income nations in the Journal of the American Medical Association, Japan has the highest life expectancy at 83.9 years, and the U.S. comes in last at 78.8 years.

These disparate findings reflect the vast size and diversity of the United States, including a bewildering array of behavioral, racial, social, economic, environmental, demographic, and metabolic risk factors.

The medical journal’s researchers thus caution “ … the United States average, in comparison to averages of much smaller, more homogenous countries, may lead to erroneous conclusions.”

For example, the life expectancy of Minnesota, a state comparable in size and demographics to Sweden or Denmark, has more similar population health outcomes to these countries than Minnesota has in comparison to Mississippi.

In a 2017 study for the Journal of the American Medical Association, researchers found that 74% of American variation in life expectancy—indeed, the largest source of variation—was attributable to behavioral and metabolic risk factors.

The recent annual declines in American life expectancy, based on data from the Centers for Disease Control and Prevention, were largely attributable to increased drug overdoses (opioids) and suicides.

Then, there is the special category of infant mortality. “Our infant mortality rate, kids and babies who are dying, is the highest,” says Jayapal, the Washington lawmaker.

The truth is more complicated. In their 2018 study, the JAMA researchers report that American infant mortality is indeed higher than in 10 other high-income countries. Notably, however, the researchers also found that when adjusting for low birth weights, the U.S. statistical ranking improves significantly.

They write: “When adjusting neonatal mortality to exclude deaths of infants born weighing less than 1,000g [about 2.2 pounds], the United States ranked fifth relative to the other countries, with 1.61 deaths per 1,000 live births, compared with a mean of 1.70 for all 11 countries.”

Comparisons of infant mortality between the United States and other countries are often flawed because definitions of terms and measurements are different.

As Sally Pipes, president of the Pacific Research Institute, notes, “The United States … counts every live birth in its infant-mortality statistics. But France only includes babies born after 22 weeks of gestation. In Poland, a baby has to weigh more than 1 pound, 2 ounces to count as a live birth.

“The World Health Organization notes that it is common practice in several countries, including Belgium, France, and Spain to ‘register as live births only those infants who survived for a specified period beyond birth.”

Note also that the United States has high rates of pre-term births. American medical professionals, including those participating in Medicaid, will thus intervene in complex and difficult cases and literally spend hundreds of thousands of dollars to save the life of a premature infant.

Medical professionals in other countries do not necessarily make the same moral and financial commitments.

Waiting in line for medical care is no prescription for a longer life.

Personal behavioral changes, including diet and exercise, can make a difference in longevity, but so also can the American-style investment in innovative medical technologies and America’s superior responsiveness in treating deadly disease.