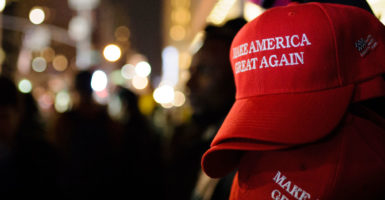 Two men who attacked a legal citizen from Togo in Maryland for wearing a “Make America Great Again” hat are facing 10 or more years in prison. (Photo: David Cliff/SOPA Images/LightRocket via Getty Images)

A legal citizen from Togo was reportedly attacked in Maryland for wearing a “Make America Great Again” hat on Saturday, as police have taken two suspects into custody.

The man, who lives in Germantown, Maryland, was reportedly attacked in his neighborhood by two men because he was wearing the hat, in support of President Donald Trump. He was reportedly hit in the head and upper body as the two suspects tried to steal his hat from him, according to ABC7.

The Montgomery County Police Department said the victim, “who was wearing a red, Make America Great Again hat, was approached by two men who began harassing the victim and asking why he was wearing the MAGA hat.”

“The victim told the suspects that he was entitled to his own views and kept walking away from the suspects. The suspects began striking the victim and telling him to take the hat off. The victim continued to be struck by the suspects until he fell to the ground.

MORE: MoCo ? have arrested 27yo Jovan Crawford of Gaithersburg, Md. and 25yo Scott Roberson of NW DC for the politically motivated assault. They each face 10+ years in prison.

The victim says he forgives his attackers, but hopes they become more tolerant of opposing viewpoints. pic.twitter.com/gYA0zKt0nF

The men are reportedly facing 10 or more years in prison.