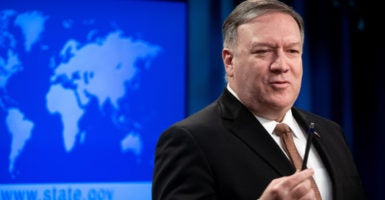 "This decision is a victory for the rule of law and the integrity of the [International Criminal Court] as an institution, given the United States is not subject to the ICC’s jurisdiction," says Secretary of State Mike Pompeo. (Photo: Saul Loeb/AFP/Getty Images)

After nearly 18 months of deliberations, the Pre-Trial Chamber of the International Criminal Court decided on April 12 to reject the request from ICC prosecutor Fatou Bensouda to open an investigation into war crimes and crimes against humanity allegedly committed in Afghanistan since May 2003.

This is a long overdue and welcome decision for the U.S. and removes, for the moment, the troubling prospect of the ICC issuing warrants for U.S. officials and military personnel.

Nonetheless, it is worth noting that the Pre-Trial Chamber agreed with the prosecutor that the situation in Afghanistan was justified based on both jurisdiction and admissibility, but was nonetheless rejected due to concern the International Criminal Court would not be able to try the case successfully due to: inadequately preserved evidence; poor prospects for “securing meaningful cooperation from relevant authorities”; and having to reallocate limited financial and human resources to this investigation and away from “other scenarios … which appear to have more realistic prospects to lead to trials and thus effectively foster the interests of justice, possibly compromising their chances for success.” With these concerns in mind, the Pre-Trial Chamber concluded:

In summary, the Chamber believes that, notwithstanding the fact all the relevant requirements are met as regards both jurisdiction and admissibility, the current circumstances of the situation in Afghanistan are such as to make the prospects for a successful investigation and prosecution extremely limited. Accordingly, it is unlikely that pursuing an investigation would result in meeting the objectives listed by the victims favoring the investigation, or otherwise positively contributing to it.

In other words, the rejection because of practical concerns, not legal ones. As noted by the Office of the Prosecutor,

The Office of the Prosecutor notes that the Judges of Pre-Trial Chamber II are satisfied that there is a reasonable basis to believe that crimes under the jurisdiction of the International Criminal Court have been committed in Afghanistan, and that the requirements of gravity and complementarity have been met. The Pre-Trial Chamber then refused to authorize an investigation on its assessment of the interests of justice.  The Office will further analyze the decision and its implications, and consider all available legal remedies.

The possibility of an appeal exists. However, it is reassuring that even International Criminal Court advocates believe that the basis of the decision—that opening an investigation is not in the interests of justice—makes a successful appeal of the decision unlikely.

Following the decision, Secretary of State Mike Pompeo noted, “This decision is a victory for the rule of law and the integrity of the ICC as an institution, given the United States is not subject to the ICC’s jurisdiction.” It is indeed a victory, but it does not resolve the fundamental conflict between the U.S. and the International Criminal Court.

Regardless of the Afghanistan decision, the International Criminal Court still claims authority to investigate the U.S. in certain circumstances despite the U.S. not being a party to the Rome Statute, rejecting ICC jurisdiction over U.S. persons, and taking steps to insulate itself from ICC jurisdiction.

Although the U.S. has occasionally supported ICC efforts to bring criminals to justice, the U.S. has repeatedly rejected the court’s claims of jurisdiction and kept the ICC at arm’s length even under President Barack Obama.

This underscores the wisdom of the U.S. decision to forego ratification of the Rome Statute, enact laws circumscribing U.S. engagement with the ICC, and recent decisions that, in the words of Pompeo, “protect allied and American military and civilian personnel from living in fear from unjust prosecution for actions taken to defend our great nation.”

Although this experience and other recent setbacks for the ICC should lead the ICC and States Parties to re-evaluate the trajectory of the court, this is far from certain.

As it stands, President Donald Trump is correct to warn, “Since the creation of the ICC, the United States has consistently declined to join the court because of its broad, unaccountable prosecutorial powers; the threat it poses to American national sovereignty; and other deficiencies that render it illegitimate. Any attempt to target American, Israeli, or allied personnel for prosecution will be met with a swift and vigorous response.”