‘Something Wrong’ When House Must Debate Born-Alive Bill, Lawmaker Says 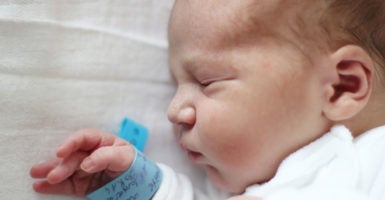 A South Carolina lawmaker says it is unconscionable that legislation to force a House vote on medical care for babies who survive abortion is so controversial.

“Something’s wrong in America when we’re dealing with this and having [to] even debate this,” Rep. Ralph Norman, R-S.C., said on the sixth installment, published Thursday, of a new podcast from the House Freedom Caucus.

The legislation would require medical professionals to give the same care to a baby who survives an abortion as they would to any other baby of the same age, as well as to take the baby to a hospital.

If an abortion doctor intentionally kills a baby who was born alive, he or she would face fines or up to five years in jail, according to Scalise and Wagner.

“Right now we’re hovering around 200 signatures on that thing,” Rep. Jody Hice, R-Ga., host of the podcast, said of the petition.

“We’re trying to use this discharge [petition] to put Democrats on record about where they stand on the issue of infanticide and letting babies die after they survive an abortion.”

A discharge petition, which isn’t usually successful, requires gathering at least 218 signatures from House members to oblige the chamber’s Democrat leadership to bring the bill to the floor for debate and a vote.

Republicans hold 197 seats, compared with Democrats’ 235 seats, meaning Republicans have to acquire at least 21 signatures from Democrats to force a floor vote.

Hice said it is “disturbing” to witness how partisan the born-alive legislation has become.

“This is an outright life issue,” the Georgia lawmaker said, adding:

Even individuals who are pro-choice understand that when the baby is born alive, this is a whole different issue, and polls I’ve seen indicate something like 77% of people who are even pro-choice don’t believe it’s right to kill a baby after he’s born.

And yet … this is still a partisan issue, which is astounding to me, and it’s disturbing how few Democrats are standing against infanticide.

Norman said the rights of unborn children aren’t being taken into consideration in the discussion surrounding the born-alive bill.

“I’ve heard this said a lot … [that] it’s not about a woman’s right to choose, it’s about a child’s right to live,” he said.

Hice said it’s encouraging, however, to see the sanctity of life back in the limelight after New York Gov. Andrew Cuomo, a Democrat, signed a bill Jan. 22 legalizing abortion up to the point of birth and Virginia Gov. Ralph Northam, a Democrat, endorsed similar legislation in his state.

“And there is no question whatsoever that America is swinging towards pro-life like never before,” Hice said. “The younger generation is America as a whole. And I believe the comments from Gov. Northam and what happened in New York, as you talked about, all this is bringing an awareness to the American people.”

Listen to the full podcast here: