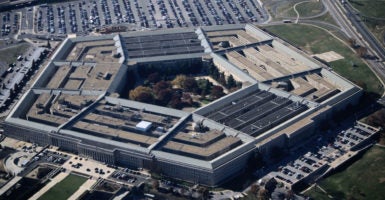 Andrew Marshall was a rare and extraordinary man. The vast majority of Americans will never know the many ways in which he contributed to our nation’s long-term security. (Photo: Hisham Ibrahim/ Getty Images)

America lost one of its greatest national security assets with the passing last month of Andrew W. Marshall.

He was an American foreign policy strategist, defense analyst, and director of the Office of Net Assessment in the Office of the Secretary of Defense from 1973 to 2015, working into his 90s.

Marshall’s extraordinary career spanned more than six decades, and many who knew him intimately have already written of their admiration for the man and his work.

Most of these tributes highlight his accomplishments, how he foresaw dangers long before others, and how he influenced major national security and foreign policy decisions across every administration from President Richard Nixon’s to President Barack Obama’s.

My thoughts gravitate toward the man and how he approached his work, lived his life, and served as an example and mentor to those who worked for and with him.

In contrast to so many who pass through the national security establishment, Marshall preferred to work behind the scenes, thinking deeply about important and highly complex matters. He routinely looked beyond the usual circle of suspects to find people who thought about things in unconventional ways or whose assessments of security, economic, political, scientific, and social matters ran counter to the accepted wisdom of established authorities.

He actively sought outlier views and pursued research that normally would never have received a nickel’s worth of support because the person, line of inquiry, or time needed for the project did not fit neatly into a well-understood category.

Marshall enjoyed finding and cultivating younger scholars. With a twinkle in his eye and a slight smile on his lips, he would lean into a conversation with some youngster who was working to understand the complicated world around him or her.

It was this Marshall to whom I was drawn and from whom I drew so much encouragement in my own work and in my personal and professional development—learning how to ask the right questions, to figure out what the actual problem was that needed addressing, to keep one’s eye on the primary question, and to maintain a healthy skepticism of answers that seemed too simple or that demanded little in the way of hard choices among competing priorities and interests.

It was normal for Marshall to assign an area of inquiry to a new military assistant—and then expect to not to speak with him again for months. He wanted the person to invest in thinking, reading, and speaking to others about the issue—then to think and research it some more before drafting even a rudimentary outline for the project.

At that point, after reviewing, Marshall would say something like: “Well, you have come up with an interesting item or two that perhaps merit exploring further. Let’s look at this particular point [perhaps just one item in a lengthy paper covering many] a bit more and see where it goes.”

One could serve two or three years in the office and perhaps write just one good paper and that was perfectly fine with him—provided it was a good paper.

Marshall preferred to get things right, rather than rushed. To his mind, it was the right question that mattered, and if it took years of effort and multiple lines of inquiry to determine the right question—well, that was simply what was needed.

He did not own a computer and refused to have one in his office, preferring to read things in hard copy and to scribble notes in the margins, all the better to fully digest the material and to take the time to think about what something meant.

I learned many things from Marshall while serving as his Marine Corps military assistant from 2001 to 2003 and in other capacities in the years that followed.

It’s a big, exciting world, and Marshall never lost sight of that fact. His office was established to assess its dangers, but he savored the fact that the world also holds so much that merits—even demands—enjoying.

That awareness made it all the more important that the world be defended from the threats that routinely arise in ways both easy to forecast and impossible to predict.

Marshall was a rare and extraordinary man. The vast majority of Americans will never know the many ways in which he contributed to our nation’s long-term security. But for those who were blessed to cross his path and to associate with him personally and professionally, his works, his wisdom, and his character will never be forgotten.