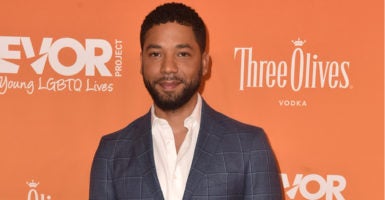 Jussie Smollett’s case about an alleged attack in January could be headed to a grand jury.

Law official sources reported the case could be headed to a grand jury sometime this week, according to TMZ Sunday. Law enforcement is allegedly making sure Smollett is not in contact with the two Nigerian brothers who were first arrested Wednesday, but then released Friday.

The Daily Caller News Foundation contacted the Chicago Police Department Monday to confirm if Smollett’s case was headed to a grand jury.

“We do not have that information at this point,” Jennifer Bryk of CPD said to The Daily Caller News Foundation over email.

Rafer Weigel of Fox 32 tweeted Monday that CPD said Smollett’s case could go to a grand jury if the “Empire” actor does not “voluntarily come in for questioning.”

“CPD says ‘it’s certainly possible’ #JussieSmollett case could go to Grand Jury but ‘that’s way too premature,'” Weigel tweeted. “May be a last resort if #Smollett doesn’t voluntarily come in for questioning. CPD says #Smollett’s lawyers have given no indication he will despite several requests.”

Smollett reported he was attacked, doused with an unknown chemical substance, had a rope tied around his neck and two men who yelled, “This is MAGA [Make America Great Again] country” at him on Jan. 29.

There have been reports, however, that the attack was staged by Smollett and the two brothers were allegedly paid to help, according to CNN.

Smollett’s attorneys Todd Pugh and Victor Henderson released a statement Sunday saying such claims were “nothing further from the truth.”

“We can confirm that the information received from the individuals questioned by police earlier in the ‘Empire’ case has in fact shifted the trajectory of the investigation,” CPD spokesman Anthony Guglielmi said in a statement Sunday to The Daily Caller News Foundation. “We’ve reached out to the ‘Empire’ cast member’s attorney to request a follow-up interview.”

Pugh, Henderson, and Smollett’s crisis manager, Anne Kavanagh, did not respond to The Daily Caller News Foundation’s request for comment in time for publication.