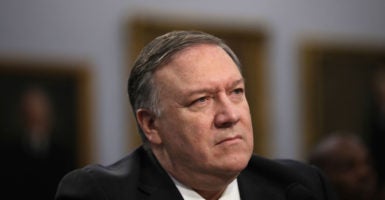 Is hiring Christian leaders a crime? The New York Times seems to think so.

More than halfway into President Donald Trump’s term, the liberal media still can’t seem to wrap their minds around an administration that doesn’t see faith as a disqualifying factor for employment. From Russell Vought to Amy Coney Barrett, the left is absolutely confounded at the idea that Christians are not only nominated by this administration—but embraced by it.

With typical horror, the Times zeroed in on Secretary of State Mike Pompeo and some recent comments he made on a trip to Jerusalem that dared to reference his Christian faith. “Mike Pompeo,” the headline accused, “Blends Beliefs and Policy.” Yes, and so—by the way—did every member of former President Barack Obama’s team. It’s just that their beliefs usually had nothing to do with religion. Now that Pompeo’s do, it’s a problem.

The reporter ticks off a long list of offenses—Pompeo’s regular Bible reading, his religious background, and his concern for religious liberty—as reasons he’s apparently unfit to serve as America’s top diplomat. “[N]o secretary of state in recent decades has been as open and fervent as Mr. Pompeo about discussing Christianity and foreign policy in the same breath. That has increasingly raised questions about the extent to which evangelical beliefs are influencing American diplomacy.”

The reporter seemed especially scandalized by an interview from November where Pompeo told the paper’s magazine that the Bible “informs everything I do.” It’s also informed almost every president since George Washington. It only became a problem recently, during Obama’s eight-year war on Christianity.

If believing in God is a problem, shouldn’t the Times be talking to Congress? According to Pew Research, 88 percent of the House and Senate are Christians.

When it comes to Trump’s nominees, however, most liberals would agree: Christianity is a “great religion”—just don’t bring it to work. It’s the same Feinstein-Sanders “religious test” that’s played out in every confirmation fight since 2017.

Last year, the left’s intolerance got so out of hand in the Pompeo hearings that social media started parodying it. “Vox scoop: Mike Pompeo is a Christian,” one man joked on Twitter. “Local Christian is a Christian,” said another. “Follower of Christ says something followers of Christ typically say,” posted one. The jabs went on and on.

One reader told the outlet that it might want to consider hiring an observant Christian so that it can spare itself this kind of embarrassment. “Um, this is just kind of mainstream Christian theology.”

Extremists think people of faith should have three options: leave their faith at home, hide it, or have no faith. And none of those are as preferable as what the far-left would really prefer, which is excluding Christians from public service altogether.

We’ve seen that reaction just this week when a Pennsylvania legislator dared to open a session by praying in Jesus’s name. Democrats said they were offended because she mentioned Jesus 13 times. But if they’re being honest, it isn’t the number of references that offended them—it’s Jesus who did.

In the end, the values of Christianity have provided the moral framework for the United States to be a champion of freedom and human rights for decades. If anything, we should be proud of that heritage—not apologetic.