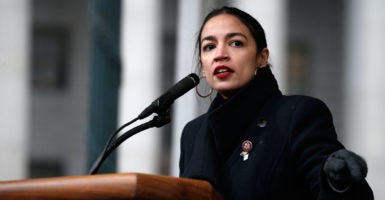 Socialism is trending in America. Politicians once ran from the term; now more embrace it. And polls show younger people are favoring it.

Rep. Alexandria Ocasio-Cortez, D-N.Y., won a seat in Congress by promising free health care for all, free college tuition, and something called climate justice. According to her Green New Deal, climate justice includes a government-guaranteed “basic income” for everyone, including all those “unwilling to work.”

Unfortunately, something-for-nothing socialist rhetoric has a strong appeal. A recent Gallup survey found more than half of America’s young people have a positive view of socialism.

So why is socialism gaining popularity?

Part of the reason lies in our schools. Socialism has failed everywhere it has been tried—from the former Soviet Union and to Mao’s China—and killed tens of millions through violence and starvation in the process.

Yet students get little of that history today. Instead, they are often taught the evils of capitalism—that it creates inequality, rewards the privileged few at the expense of the many, and is an engine of oppression and exploitation of the masses. This perverse indoctrination is echoed and amplified in the media.

In truth, capitalism has done more to lift the world out of poverty than any other economic system ever devised. Over the last 25 years, the spread of policies that promote economic freedom has cut the global poverty rate by two thirds.

And capitalism does more than “just” improve general prosperity. Academic studies show that economic freedom is also strongly correlated with greater individual freedom, better health, more educational options, and a cleaner environment. In other words, all the things that socialism promises but can’t deliver.

But the younger generation isn’t being taught these truths. Instead, they are instructed that free markets are tools of exploitation, run by greed-driven conservatives who place profits above all else. Socialism, they are told, is simply a system for making sure that everyone’s needs are taken care of.

The younger generation sees people suffering and wants to help—and they are told the government is the means to accomplish that.

But we don’t need to go so far afield as Venezuela or Cuba for modern proof that more government is not an effective remedy. There is plenty of evidence here at home.

Consider the Great Society programs ushered in under President Lyndon Johnson. Now, more than 50 years later, they have been expanded into more than 90 means-tested aid programs that cost taxpayers more than $1.1 trillion annually. Yet the poverty rate is essentially unchanged from what it was in the 1960s.

Rather than lift millions from poverty, our welfare system has trapped millions in poverty or near poverty, creating generations of dependence on government.

As a black woman who grew up poor in the projects of Richmond, Virginia, I know exactly what an all-giving, all-powerful government can do to families and entire communities. It’s why I became a conservative and why I’ve dedicated my adult life to seeking solutions that actually help people—solutions that raise all boats.

Temporary safety nets are fine. But letting people keep more of their own money by cutting individual taxes, letting businesses grow by cutting onerous regulations and taxes, and getting government out of health care and the free market back in have paved the way for a growing economy, new jobs, increased wages, and more affordable health care for families.

Will the rising generation come to realize this, too? There is reason to hope so.

The same polling that shows people warming up to socialism also shows them cooling when they start to understand what it entails. While they initially love the notion of free college, free health care, and a $15 an hour minimum wage, many turn against these ideas when given even a few details—what it would cost them in taxes, how their freedom and their options would be restricted, and how bureaucrats in far-off places would be making decisions for them.

This tells us that, while conservatives have the right answers, we need to do a better job of communicating them. If we fail to break through the constant deluge of socialist claptrap, our future and theirs is in peril.

We who cherish freedom must take on the false prophets of socialism and spread the truth that limited government, free markets, and a nation based on the rule of law are the surest ways to ensure freedom, prosperity, and opportunity for all.